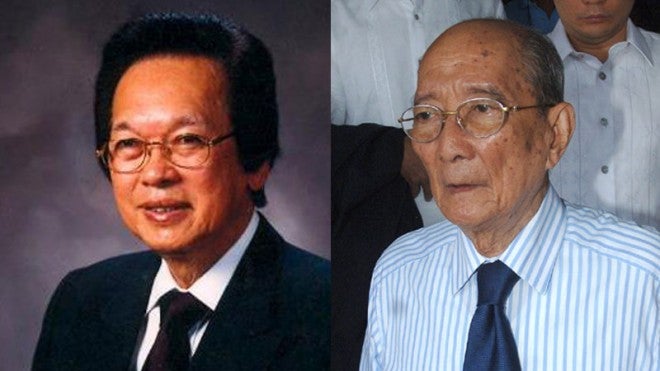 The trial of the pork barrel scam cases at the Sandiganbayan has become a reunion of sorts for Sen. Juan Ponce Enrile and his lead counsel, Estelito Mendoza, 84.  Both men used to be peers in the Marcos Cabinet, with Enrile as Marcos’ longtime defense minister, and Mendoza as Marcos’ justice secretary in the last two years of his regime.

The two graduates of the University of the Philippines and Harvard University are considered the best and the brightest of their generation. Both also share a fondness for the tablet: Enrile plays the computer game “Bejeweled” on his iPad mini in the Session Hall, while Mendoza, who is hard of hearing, uses the device to keep up with the discussion. His staff types the ongoing conversation on his tablet during meetings.

Flaminiano, 84, was also a defense counsel for former President Joseph Estrada in his impeachment trial in 2000, as well as in criminal proceedings in the Sandiganbayan.

Bodegon was the lawyer of TV host Willie Revillame when the latter filed an P11.5-million damage suit against ABS-CBN in 2010.

Except for Mendoza, all of Enrile’s lawyers, including that of his chief of staff Jose Antonio Evangelista, belong to the senator’s law firm, Pecabar, including one of his partners, Eleazar B. Reyes.

Mendoza shepherded former President Estrada’s defense in his plunder trial at the Sandiganbayan from 2001 to 2007, which ended in the conviction of now Manila Mayor Estrada, and the acquittal of all his coaccused, including his son Jinggoy.

Curiously, Mendoza’s defense of Enrile sounds similar to his legal arguments for former client Estrada. The lawyer said there was no evidence that both Enrile and Estrada had received kickbacks from businesswoman Janet Lim-Napoles and the “jueteng” lords, respectively.

Flaminiano served as state prosecutor of the Department of Justice and city prosecutor in Manila and Pasay City before returning to private practice in 1987. He was one of former President Arroyo’s lawyers in the graft case involving the controversial NBN broadband deal.

According to whistle-blower and state witness Marina Sula, Flaminiano was also the lawyer of Napoles in a case filed by the military against her and her relatives in 2002, for her failure to deliver the Kevlar helmets worth P3.8 million that the Philippine Marines had ordered. Napoles was acquitted by the Sandiganbayan in 2010 for lack of evidence, Sula said.

Bodegon is the managing partner of the Bodegon, Estorninos, Guerzon, Borje and Gozos Law Offices.