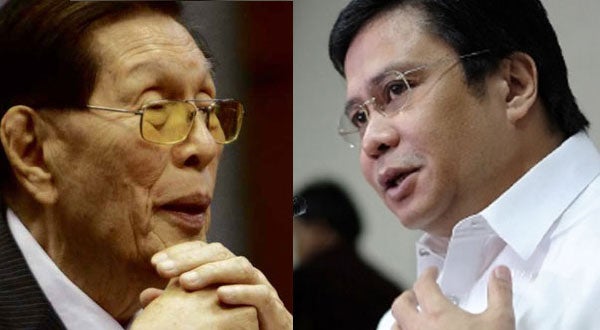 The Sandiganbayan’s Third Division opened oral arguments on Friday on Enrile’s petition to dismiss the plunder case against him and to be allowed to post bail, citing his advanced age (90 years).

Enrile has been charged with one count of plunder and 15 counts of graft in the Third Division, which has submitted the case for resolution. The division is chaired by Presiding Justice Amparo Cabotaje-Tang, with members Associate Justices Samuel Martires and Alex Quiroz.

While the Sandiganbayan is expected to issue an arrest warrant against Enrile on Monday at the earliest, Mendoza said it was too early to talk about Enrile’s surrender.

After Mendoza warned the court during the oral arguments against falling for the “clamor of the mob,” Martires said the antigraft court would not be swayed by public opinion.

Over at the antigraft court’s Fifth Division, which is hearing the case of Sen. Jinggoy Estrada, the court said it would be deciding soon whether there is probable cause to order the arrest of Estrada and 25 coaccused in his plunder and graft cases.

Wrapping up the hearing in 10 minutes, the division chair, Associate Justice Roland Jurado, denied defense motions to suspend the proceedings, including the issuance of arrest warrrants.

The court also turned down the defense lawyers’ request to formally comment again on the Ombudsman’s charges.

The division’s members are Associate Justices Alexander Gesmundo and Quiroz. The latter was temporarily assigned to fill the division’s vacant third seat.

Lawyers representing Estrada, Janet Lim-Napoles and Budget Undersecretary Mario Relampagos and some other accused no longer argued their case.

Not so at the Third Division where during oral arguments, Mendoza challenged Morales to produce the ‘smoking gun’ from the 10,000 pages of evidence that her office submitted to the Sandiganbayan to pin down his client.

Just like a person asking why he is facing a firing squad, Mendoza said Enrile is asking the Ombudsman: “Why are you filing plunder against me?”

“I think my arguments can be very easily responded to by the Ombudsman by simply amending the information, putting all the details and then we will see if the charges are for plunder,” said Mendoza.

The lawyer said that the least requirement to prove plunder was to show “a form or receipt” that Enrile received money or “for anybody to attest that they delivered any money” to Enrile.

Enrile has been accused of amassing P172,834,500 in kickbacks from his Priority Development Assistance Fund (PDAF) allegedly through fake nongovernment organizations owned by the alleged scam mastermind, Napoles.

“I am challenging the prosecution to go through the evidence brought to the court and pick out pieces of evidence that he (Enrile) received P172 million,” Mendoza said.

In a briefing paper on Enrile’s urgent omnibus motion to dismiss the case, the senator’s legal team said the evidence against him was “simply underwhelming and clearly inadequate” as Enrile’s role in the PDAF disbursement process was to recommend projects. Nobody saw Enrile take bribes or conspire with Napoles or agency chiefs, and all whistle-blowers, notably Benhur Luy, declared they never met Enrile and they never had personal knowledge of transactions with him, the lawyers argued.

Enrile’s legal team belittled Luy’s business ledger, which it described as “the only evidence to establish Enrile’s supposed receipt of kickbakcs,” as hearsay (based solely on what Napoles told him), customized for this case (the transactions were supposed to date back to 2004 but the ledger was prepared only last year), and does not match the report of the Commission on Audit (COA) or the Ombudsman’s Field Investigation Office.

The team argued that the COA report actually favored Enrile’s defense as it stated that the Executive Branch through its implementing agencies were responsible for implementing the projects and liquidating the funds.

The team also said that the whistle-blowers’ own admission that they fabricated the documents and forged the signatures that facilitated the release of PDAF has made the evidence unreliable and inadmissible.

On charges of a conspiracy between Enrile and his staff, the legal team noted that the authority he gave to his chief of staff (Jessica Lucila “Gigi” Reyes) and deputy chief of staff (Jose Antonio Evangelista II) was “made explicitly subject to the pertinent rules and regulations and for the proper implementation of projects.” The team noted that since the supporting papers for the PDAF releases were forged, Enrile was ignorant of these transactions.

The legal team said that Enrile’s participation in the PDAF disbursement process after his endorsement was unnecessary as this was “merely inserted” by Napoles, the whistle-blowers, and implementing agencies as “an obvious cover-up and pretext for the violations they committed.”

The defense team also said that there was no evidence to show that Enrile was acquainted or has met Napoles or any head of the implementing agencies.

Estrada on Friday spent the day plotting his next legal move with his lawyers in his Quezon City home.

The senator met with his lawyers for hours to discuss how they would respond to the Sandiganbayan ruling on his motion for the judicial determination of probable cause.

He said they agreed to file a motion for bail with the antigraft court on Monday, the day the Sandiganbayan is set to rule on his pending motion.

“If they’re going to issue a warrant, then we will file the motion for bail, first and foremost,” he said by phone from his Corinthian Hills residence. “For now, that’s the motion we agreed to file,” he said.

The elder Estrada was convicted of plunder in 2007, but was pardoned shortly after by President Gloria Macapagal-Arroyo.

Speaking to reporters on Thursday, Estrada said he was “experiencing mental torture” as he waited for the issuance of an arrest warrant.

“I don’t know when it’s going to be issued: tomorrow, next week or two weeks from now,” he said.

“The fear is always there. Just the mere thought of it (jail) makes my hair stand on end. I’m worried about my children,” he said.

Estrada said he had a “pep talk “with his family to prepare them for his arrest. He said his 8-year-old daughter, the youngest of his four children, was the most affected.

“She’s been crying to me,” he said of his daughter, who sleeps with him at night.

Estrada said he hoped the order would not be issued on or before June 28, when he and his wife, Precy, will be marking their silver wedding anniversary.

“Otherwise, we will have a simple gathering with my close friends and relatives,” he said. “With the unfolding events, it looks dim. But I told my wife, I’ll marry her even in jail.”

The Philippine National Police has built a four-room bungalow for the three high-profile detainees inside Camp Crame. Each room has a toilet, shower, ceiling fan and bed.

“Maybe, they can allow TV in my room. If we’re not suspended by the Sandiganbayan, and I hope that they don’t suspend us, then we remain senators and we have a right to know what’s happening outside,” Estrada said.

When he was detained from 2001 to 2003 while being tried for plunder, a charge of which he was later acquitted, Estrada said he enjoyed watching soap operas on TV. He also exercised and slept a lot, he said.

“Cable TV is important to me, so I can tune in to teleseryes again,” he said.

The younger Estrada lives in the exclusive Corinthian Hills on Temple Drive, Barangay Ugong Norte, where he waited all day on Friday for the antigraft court to issue the arrest warrant against him. In the end, it didn’t come.

A few enterprising media outfits, including the Inquirer, had staked out the front of Corinthian Hills since early Friday morning.

However, unlike Sen. Bong Revilla’s vigil, which had been a free-for-all affair widely followed by his supporters and the media from Thursday night up until he reached the Sandiganbayan on Friday, it was as if Estrada was not even in the area. There was no visible augmentation of the village’s security.

The Inquirer tried to get to Estrada’s house using two different gates but, after waiting for half an hour, were turned down by the guards.

“They don’t want to let you in,” said a guard. “They choose who they will allow to enter.”

Apparently, only reporters from the Senate beat—those whom Estrada knew personally—were allowed in.

The many media vans outside the subdivision piqued the interest of outsiders, such as a security guard working for a shopping center just outside the Corinthian Hills gates.

“Who are you covering here?” asked the guard, who refused to be identified because of his job. When told it was Estrada, he added, “Ah, I haven’t really seen him here.”

He said he doubted that Estrada would be arrested on Friday. “It’s already late,” he said. With Dona Pazzibugan and Nathaniel R. Melican

No stranger to detention, Enrile unperturbed by raps, possible arrest