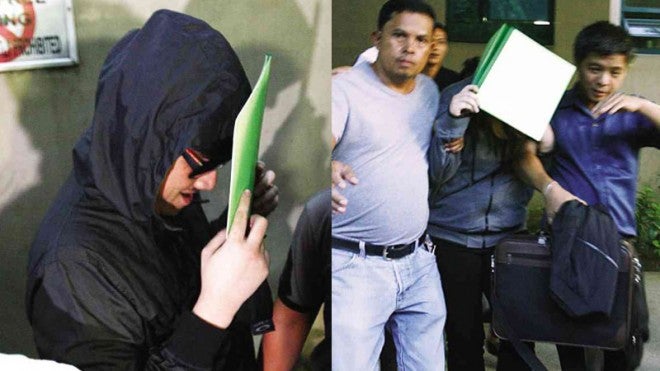 “A milestone in our justice system.”

This was how Justice Secretary Leila de Lima described the arrest and detention on Friday of movie star politician Sen. Bong Revilla in connection with his alleged plunder of his pork barrel fund allotments for the year 2007 to 2009.

“In the beginning it was next to impossible and highly improbable that our elected officials would be issued [a] warrant and arrested before the Sandiganbayan,” De Lima told reporters following the surrender of Revilla to the antigraft court early Friday.

She said it showed the “determination and resolve of the Aquino administration’s anticorruption campaign.”

Dina Garin gently clapped her hand as she saw Revilla being led by police officials to a building at Camp Crame where he was officially booked for plunder and graft charges on Friday.

“This is how we should treat politicians who steal the people’s money,” Garin, a non-uniformed personnel of the Philippine National Police (PNP), said.

“I clapped my hand because as a taxpayer, I’m happy that somebody is being made accountable for stealing the taxes I pay. This is good for the country,” she told the Inquirer.

The Sandiganbayan’s First Division ordered the arrest of Revilla after finding probable cause in the plunder case filed against him by the Ombudsman.

Interior Secretary Mar Roxas said the arrest of Revilla was proof that the “law applies to all.”

“In the Philippines, the law applies to all. This is not selective justice,” Roxas told a news briefing moments before Revilla was taken to Camp Crame at around noon Friday.

“I think the message (of Revilla’s arrest) to the Filipino people is that we all should follow the law,” he said.

De Lima said that although there had been precedents in the past with the arrest and detention of former Presidents Joseph Estrada and Gloria Macapagal-Arroyo, “this time it’s different.”

“This is the first time that several elected members of the Senate will stand trial for plunder. It’s really a milestone,” she said.

Revilla, who has signaled his intention to run for President in 2016, was the first senator to be detained on plunder and graft charges in connection with the alleged misuse of his congressional pork barrel, officially called the Priority Development Assistance Fund (PDAF), allotments.

Roxas is widely believed to be the ruling Liberal Party’s presidential standard-bearer in 2016.

Asked if the same rules would apply to President Aquino’s political allies who have been similarly linked to the P10-billion pork barrel scam, Roxas said: “Yes. The President himself said we will follow where the evidence would lead us.”

De Lima commended the “expeditious action” of the Sandiganbayan in ordering the arrest of Revilla.

“I think the Sandiganbayan is conscious of the very interest of the public and they are up to the challenge and will discharge their mandate as professionals judiciously. They did not allow clear dilatory tactics,” she said.

In Malacañang, deputy presidential spokesperson Abigail Valte said Revilla’s surrender spared the PNP and “everyone from a protracted arrest process.”

“At least, the authorities didn’t have to go to him to pick him up,” she told a Palace briefing.

Communications Secretary Herminio Coloma Jr. said the issuance of arrest warrants for Revilla and his coaccused was a “significant step forward in the judicial process.”

“We believe that through a fair and just trial, accountability will be clearly established and in like manner, those who are innocent will be exonerated,” Coloma said in a statement.

“We join the citizenry in hoping that truth and justice will prevail,” he added.

Revilla and Senators Juan Ponce Enrile and Jinggoy Estrada are the three senators so far to have been indicted in the P10-billion pork barrel scam. Enrile and Estrada have also made arrangements to surrender to PNP Director General Alan Purisima once the antigraft court issues warrants for their arrest.

De Lima said that in the case of two accused who have reportedly fled the country—Antonio Ortiz, head of the Technology Resource Center and Renato Ornupia a former employee of alleged pork barrel mastermind Janet Lim-Napoles—“we will invoke the mutual legal assistance treaty with the country where they are hiding.”

Roxas defended the PNP from accusations that it was giving special treatment to Revilla. The latter has publicly criticized Roxas for his supposed role in the filing of the plunder case against him and fellow opposition Senators Enrile and Estrada.

Roxas said the PNP was merely complying with the Sandiganbayan order to detain Revilla at the PNP Custodial Center at Camp Crame.

He said the newly constructed detention room that Revilla would occupy was originally built to serve as the living quarters for the officers of the PNP Custodial Service Unit.

Roxas reiterated that the PNP cannot hold Revilla and other high-risk personalities at the detention facility because of security concerns.

‘This is not jail’

“This is not a jail. This is just a temporary detention facility. We all know that. This is supposed to be the quarters of the police officers. But the PNP is accountable for the safety of the detainees inside the detention facility, ” he said.

“That’s why the police generals, communist insurgents, (Moro) rebels and other detainees are separately detained inside the Custodial Center,” Roxas said.

He stressed that the policies applied by the Bureau of Jail Management and Penology to other detention facilities in the country would be strictly implemented at the PNP custodial facility.