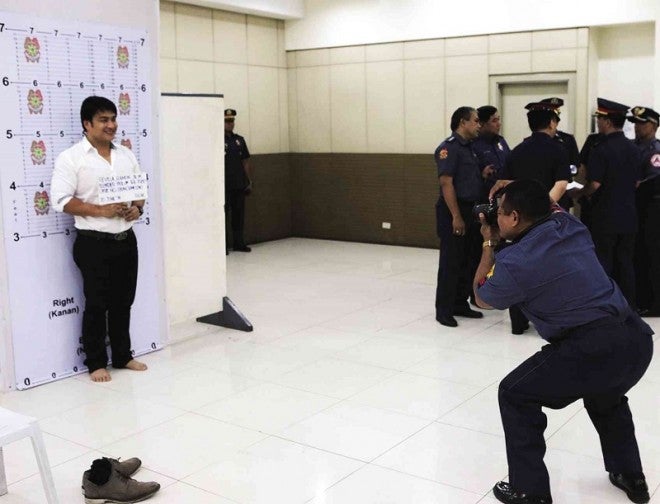 READY FOR HIS CLOSE-UP Sen. Bong Revilla poses for his mug shot as part of the booking procedure in Camp Crame. Revilla, who is facing charges of one count of plunder and 16 counts of graft in the P10-billion pork barrel scam, motored to the Sandiganbayan with a 10-vehicle convoy to surrender on Friday. He arrived smiling and waving like already on the campaign trail followed by an entourage of fans, family, friends and bodyguards. PNP-PIO

“I will rise again,” Sen. Bong Revilla declared on Friday, as he turned himself in at the Sandiganbayan amid the shrieking of his fans and the jostling among photographers and court employees that led to broken glass and shoes getting lost in the mad dash to cover the first high-profile arrest in the P10-billion pork barrel scam. Just like in the movies.

He said his arrest would not stop his plan to run for president in 2016.

“I will run if the people demand it,” he said. “Who knows, for the first time, we’ll have a President who is a prisoner.”

An action movie hero who parlayed his popularity into a career in politics, Revilla, 47, was the first politician to be arrested on charges of plunder and graft in the large-scale diversion of rural-development funds exposed by the Inquirer in July last year.

His coaccused, Senators Jinggoy Estrada and Juan Ponce Enrile, also indicted for plunder and graft in the Sandiganbayan on June 6, are set to surrender, next Monday at the earliest when the antigraft court issues warrants for their arrest.

The alleged brains behind the pork barrel scam, businesswoman Janet Lim-Napoles, is already under police custody, but in a case separate from the alleged plundering of the Priority Development Assistance Fund (PDAF).

Revilla traveled to Manila in a 10-vehicle convoy with family members and fans from his home in Bacoor town, Cavite province, where he had been gathering his supporters for televised denials of taking any part in the pork barrel scam and blaming his predicament on politicking by the administration of President Aquino.

“They may put me in jail, but not my love for you,” Revilla told his supporters before setting out for Manila to surrender, a day after the Sandiganbayan issued a warrant for his arrest.

Asked by reporters how he would spend his time in jail, Revilla said he would read the Bible and work out. He said he was bringing only one bag of clothing and he was ready to do his laundry himself.

“Look at what the administration is doing,” he said. “Too much politics. Enough. We have families and they are hurt,” he said, referring to fellow opposition lawmakers linked to the pork barrel scam.

Revilla’s convoy left the family mansion at 8:40 a.m. Accompanying him were his wife, Cavite Rep. Lani Mercado and their grown-up children, including Cavite Vice Gov. Jolo Revilla. They arrived at the Sandiganbayan at 11 a.m.

Neatly dressed in a white polo and pants, Revilla, in a brief interview with the media, managed to say in jest: “It’s as if I’m being buried alive. So this is how it will be when I die.”

Asked by reporters, Revilla said his arrest would not deter his bid for the presidency in 2016.

For someone facing charges, Revilla was smiling all the way, waved to his fans and gave the thumbs-up sign as he was taken by court security to the sheriff’s office through a throng of cameramen, photographers, reporters and onlookers.

In the commotion in the corridors, two fire hose glass cases were shattered and two journalists lost their shoes. They went back and got their shoes back, though.

Revilla was followed inside the sheriff’s room by his wife, who unlike her husband looked ruffled. Other family members went in, too.

Revilla briefly inspected the adjoining detention cell where surrenderees are held while their place of detention is being decided.

He waited for almost two hours until the Sandiganbayan’s First Division approved his petition and issued a commitment order for his detention at the Philippine National Police Custodial Center in Camp Crame.

Almost an hour after Revilla left, a member of his staff and coaccused in the plunder case, Richard Cambe, turned himself in.

Accompanied only by his lawyer, the 45-year old Cambe stayed inside the detention cell for about two hours until the commitment order for his transfer to the PNP Custodial Center was issued.

Being a capital offense, plunder is nonbailable.

“He takes it with great difficulty. He has nothing to do with the scam,” Ancheta said, adding they were surprised by the speed of the issuance of the arrest warrants.

The First Division ordered the issuance of the arrest warrants on Thursday afternoon, a few hours after hearing defense motions to suspend the proceedings.

The case was raffled off last Friday.

Ancheta said Cambe was wrongfully implicated by whistle-blower Benhur Luy as Revilla’s bagman for kickbacks he allegedly got from pork barrel projects.

“Comparing the signatures in the documents, the forging [of Cambe’s signature] was very poorly done,” Ancheta said, adding that Luy also mistakenly identified Cambe as Revilla’s chief of staff or political officer.

At Camp Crame, Revilla looked unruffled as he got off the vehicle of Director Benjamin Magalong, chief of the Criminal Investigation and Detection Group (CIDG), who fetched him from the Sandiganbayan.

Revilla’s wife, children and other relatives were with him as he was booked.

Chief Supt. Reuben Theodore Sindac, PNP spokesperson, said Revilla and members of his family were emotional as personnel of the PNP Crime Laboratory were taking his fingerprints.

“The senator appeared to be trying to hold back his tears while his relatives were crying during the booking procedure. It seems he was trying to stay composed throughout the process,” Sindac told a news briefing.

But in the photographs released by the PNP Public Information Office, Revilla was smiling as his mug shots were being taken.

The lawmaker, a popular action star like his father and namesake, former Sen. Ramon Revilla Sr., was also smiling during the medical checkup.

He also smiled and waved to journalists as he was led to the Custodial Center.

Sindac said Revilla’s blood pressure was 140 over 90 while his pulse rate was 80 beats per minute when police doctors checked him up around 1:10 p.m.

“His blood pressure was slightly high. He has been tired since [Thursday] night,” he said.

A police official, who asked not to be named for lack of authority to speak to journalists, said the booking procedure lasted for about 30 minutes.

But it took almost two hours before the CIDG took him to the Custodial Center as the PNP had to wait for the copy of the detention order from the Sandiganbayan, the source added.

Speaking with reporters, Sindac said the PNP decided to temporarily place Revilla’s detention room under the control and supervision of the CIDG in compliance with the court’s order.

He noted that the Sandiganbayan’s commitment order stated that arrested lawmakers should be under the custody of the CIDG.

But Sindac said the CIDG did not have a place to accommodate high-profile detainees like Revilla.

“For the meantime, that portion of the Custodial Center will be temporarily guarded by CIDG personnel,” he said.

An hour after Revilla was taken to detention, his wife and daughter emerged from the jail compound and told reporters that her husband was suffering from migraine.

“We need to buy medicines for his migraine. We will ask the PNP how we can make the temperature inside the detention room bearable,” she said in Filipino.

Joel Bodegon, Revilla’s lawyer, said they would ask PNP officials to allow them to bring an air cooler to his client’s cell.

“We will do what we can to alleviate his situation because it’s really very hot inside his jail,” he said.

Sindac said three other coaccused of Revilla had also sent surrender feelers to the PNP.

Revilla ate a hamburger while he was waiting inside the multipurpose building, located a few meters away from the Custodial Center.

Sindac could not say, however, if Revilla ate his meal.

Where will Bong Revilla be jailed, PNP asks