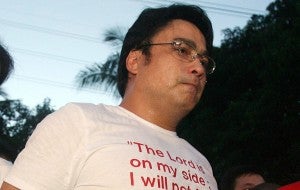 MANILA, Philippines–Due to his lack of sleep hours before his arrest, the blood pressure of Senator Ramon “Bong” Revilla Jr. shot up to 140 over 90.

Revilla said that the night before he submitted himself earlier to the Sandigbayan, he only had two hours of sleep.

After the 30-minute booking procedure, Sindac said they allowed the Senator to spend time with his family before the police admit him to jail.

He also stressed that the PNP will strictly implement the visiting policies of the Custodial Center, which is from 9 a.m. until 3 p.m.

As of posting, Revilla has been transferred to the detention facility from the PNP Multipurpose Hall where he underwent regular booking process.

No booking at Sandiganbayan; Revilla mugshots will come from PNP