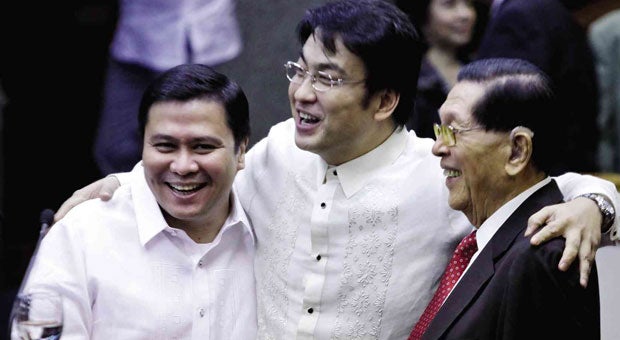 MANILA, Philippines—Before the police could even carry out arguably the most controversial arrest this year, the three senators linked to the P10-billion pork barrel scam have already sent surrender feelers to a police official.

Estrada has openly expressed his willingness to surrender, while Enrile earlier said that he would not resist the arrest and was even “ready to die in his cell.”

In a separate interview, Revilla admitted to talking to Magalong to make sure that he would be treated humanely even during his arrest.

(I just hope they treat me humanely, I won’t run from them. I will face this problem.)

The arrest warrants for the three senators and several others tagged in the multi-bullion scam are yet to be issued by the Sandiganbayan.

(They do not even have to look for me because I will voluntarily surrender once the warrant of arrest has been issued.)

Revilla said he would not mind if his arrest warrant would be served in his house.

Once the suspects surrender to Purisima, Chief Superintendent Reuben Theodore Sindac, PNP Public Information Office chief, said that the police would merely “follow and abide by with what the court will direct them to do” after the senators turn over themselves.

Revilla said it doesn’t matter to him whether the police or agents of the National Bureau of Investigation (NBI) would serve the arrest warrant to him.

The senator though expressed his preference to surrender to the CIDG.

The PNP is already anticipating that the senators would be committed to its Custodial Center at Camp Crame.

Asked if the police would handcuff the senators, Sindac said it would still depend on the circumstance of the arrest.

“(Handcuffing a person) is a form of restraint. For example, if they will surrender or voluntarily walk, there will be no opportunity to handcuff anyone,” he explained.

“But that is only theoretically speaking,” he added.

Revilla said he was more concerned about his father who has not yet accepted what was happening to him.

(He was still hoping that it would not happen. But I am still preparing him to face the worst possible scenario.)

Revilla said he would like to see his father before he is jailed.

As to when the senators would surrender, Sindac refused to divulge further details on the possible actions and counter measures of the PNP.

“We wouldn’t want to unduly signal or telegraph our moves,” he said.