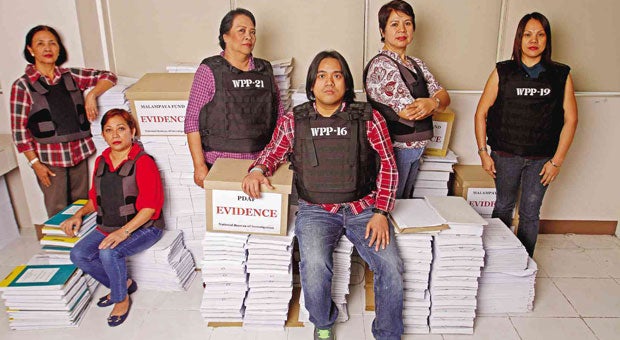 WITNESSES FOR THE PROSECUTION Whistle-blowers Merlina Suñas, Mary Arlene Baltazar, Gertrudes Luy, Benhur Luy, Marina Sula and Simonette Briones sit among copies of evidence that they provided in the P10-billion pork barrel scam at the NBI headquarters. The finding of probable cause against Senators Juan Ponce Enrile, Bong Revilla and Jinggoy Estrada, and others including Janet Napoles was not based on mere suspicion but, in the words of the Ombudsman, “on the sworn affidavits, testimonies of witnesses,” among others. The whistle-blowers have been granted immunity. ALANAH TORRALBA

MANILA, Philippines–The rejection of the motions for reconsideration of Senators Juan Ponce Enrile, Jinggoy Estrada and Ramon Revilla Jr. and Janet Lim-Napoles who were indicted April 1 in the alleged P10-billion pork barrel scam paves the way for the filing of plunder charges against them in the Sandiganbayan, the antigraft court.

Explaining the next steps, Senate President Franklin Drilon said that once the information or charges of plunder is filed in the Sandiganbayan, it will raffle the case among its five divisions to determine which will prosecute the case involving the alleged diversion of congressional Priority Development Assistance Fund (PDAF), or pork barrel, to ghost projects and kickbacks.

Drilon said the accused have the option of filing a motion for judicial determination of probable cause. “This is because under the Constitution, the judge should personally examine the witnesses and the documents.”

But he added that even without the filing of this motion by the accused, the court is  obligated to examine documents and evidence to determine probable cause and the need to issue an arrest warrant.

“Once the court has determined that there is enough basis for the issuance of a warrant of arrest, the judge will issue the warrant,” Drilon said.

In joint orders dated June 4, Ombudsman Conchita Carpio Morales rejected the motions for reconsideration filed by the respondents, saying these were “rehashes of the arguments previously raised by them and already resolved by this office.”

The orders stressed that the finding of probable cause was “not based on suspicion but on the sworn complaints, testimonies of witnesses, PDAF public documents, COA (Commission on Audit) Report, business ledgers, corporate papers of Napoles’ nongovernment organizations (NGOs), results of field verification, and admissions of some respondents themselves in their submissions.”

In a separate letter dated June 4, Morales denied Napoles’ request for immunity from suit and turn state witness. She said Napoles “appears to be among the most guilty of all respondents in these cases.”

Morales likewise denied the applications by Rhodora Mendoza and Victor Roman Cacal of the National Agribusiness Corp. and Dennis Cunanan, the head of the Technology Resource Center, to become state witnesses and avoid prosecution.

Mendoza, Cacal and Cunanan have not met all the qualifications to be discharged as state witness, Morales said. “There is no absolute necessity for their respective testimonies, and there are other direct evidence available, both testimonial and documentary, for the proper prosecution of the offenses committed,” she said.

A matter of respect

“In this particular case, these are grave offenses as we call it. They can be arrested even if Congress is in session,” he said.

“As a matter of courtesy, I will not allow them to arrest the senators in the session hall while we’re having a session. Not as a legal issue, but as a matter of respect for the institution,” he said.

Congress is set to go on sine die adjournment on June 11.

The Sandiganbayan will determine where the senators will be detained. “The moment they are arrested, technically they are in the custody of the court,” Drilon said.

Although plunder is a capital offense punishable by life imprisonment and is nonbailable, Drilon said the accused could petition for bail. Bail is denied if the evidence of guilt is strong.

The Ombudsman is expected to file a petition for a preventive suspension of the accused from their Senate duties, Drilon said. He added that the Sandiganbayan “has no option but to suspend them for 90 days.”

Morales partially granted, however, the motion of respondent Consuelo Lilian Espiritu, and indicted her for just one count of graft instead of two after she was able to establish that she did not process or sign the other set of disbursement vouchers involving the Technology Resource Center, the agency to which Espiritu is connected.

Morales granted, however, the motion of respondent Romulo Relevo, and reversed the earlier finding of probable cause for four counts of violation of the Anti-Graft and Corrupt Practices Act after he was able to prove that he did not participate in any of the subject transactions in this case.

Morales partially granted, however, the motion of Relevo in this case, and indicted him for just one count instead of five of graft after it was established that he did not process or sign the four other disbursement vouchers involving NABCOR, the agency to which Relevo is connected.

Estrada said he expected the Ombudsman’s decision and the filing of the case in the Sandiganbayan. He said he would surrender before the arrest warrant is served on him.

‘There is a God after all’

“There is a God, after all,” Santiago said in a statement. She said she expected lawyers of the senators would go to the Supreme court to delay the proceedings.

“Any boasting on the part of the accused is just whistling in the dark.  For example, Enrile said that he might represent himself.  Everybody knows that a lawyer who represents himself is a fool,” she said.

“I humbly urge the Sandigan court to conduct hearings on the motions for bail by using a summary procedure.  If evidence of guilt is strong, the accused should remain in detention to prevent them from fleeing as fugitives from justice, or financing a program of terrorism to distract the public,” she said.

“The best proof that one of the accused has used terrorist tactics to sow confusion and fear among the public is the recent obviously manufactured problems raised by the simultaneous release of the lists of pork scammers. Watch out for similar diversionary tactics,” Santiago said.