1,000 firearms sold to NPA with unwitting aid of top cops 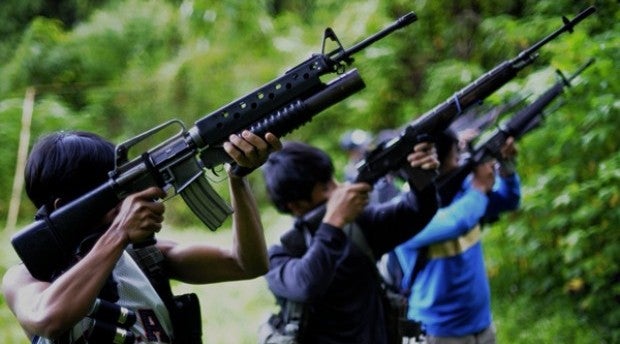 MANILA, Philippines–More than 1,000 high-powered firearms worth P52 million have been sold to communist insurgents since 2011 with the unwitting assistance of 19 senior police officials at Camp Crame, police said on Thursday.

The Criminal Investigation and Detection Group (CIDG) discovered the irregularity by investigating President Aquino’s disclosure in December last year that a cache of AK-47 assault rifles disappeared after its papers were being processed by the Philippine National Police.

Director Benjamin Magalong, CIDG chief, said that among those to be charged is Chief Supt. Raul Petrasanta, the director of the Central Luzon police who is touted to be the likely successor of PNP Director General Alan Purisima.

A 1984 graduate of the Philippine Military Academy, Petrasanta used to head the Presidential Security Group team assigned to the residence of the President’s family in Quezon City.

“The documents for the firearms went through their offices. It is incumbent upon them to exercise due diligence in examining the documents,” Magalong told a news briefing at Camp Crame.

“If they only did what they had to do, those firearms should not have ended in the hands of the insurgents,” he said.

No evidence of kickbacks

Asked if Petrasanta and the other police officials received kickbacks from the sale of the firearms, Magalong said: “We do not have evidence showing that they earned money from the transaction.”

Besides Petrasanta, Directors Gil Meneses and Napoleon Estilles, Chief Supt. Regino Catiis and retired Chief Supt. Tomas Rentoy would also be charged along with 14 other police officials and 10 private individuals for graft and for violation of the anti-illegal firearms law.

The suit will be the first to be brought against law enforcers despite longstanding reports of police and military personnel selling weapons and ammunition to communist and Moro rebels.

Rentoy is a former chief of the PNP Supervisory Office for Security and Investigative Agencies, while Catiis is a former licensing officer at the FEO.

Meneses and Estilles are already on nonduty status, as they are due to retire from the police service in the next few months.

Sought for comment, Estilles said in a text message: “The allegations are mere fabrications bereft of evidence.”

Perfecto Tagalog, secretary general of the Coalition of Filipino Consumers, questioned the result of the CIDG investigation, saying “there could be politics behind this.”

“The transactions … went through the procedures. The [users] should be the ones to face charges,” Tagalog said.

“The timing of the announcement that [the CIDG] would charge the (police) officials is suspicious,” he added.

Magalong, however, insisted that it was only businessman Isidro Lozada who facilitated the sale and licensing of the guns and that he did not deal directly with the PNP officials.

“This is the handiwork of just one man. It was Mr. Lozada who facilitated the licensing and at the same time sold the guns,” he said.

Using the permit issued to Caraga Security Agency, a security company that Lozada owned, the businessman was able to import AK-47s and register them with the FEO from 2011 to 2013, he said.

Magalong said 1,004 AK-47s were bought by Lozada from licensed gun importer Twin Pines Inc. then sold the assault rifles to communist rebels over the two-year period.

During the investigation, Magalong said, Lozada admitted that he sold assault rifles to communist rebels for P52,000 each.

“The guns were not sold to the insurgents in just one transaction, but in tranches of 30 or 50 units per transaction,” Magalong said.

He said Lozada also disclosed that he used the names of mining companies, security agencies and other juridical entities in applying for the import permits and licenses for the firearms.

“Mr. Lozada said the money came from the NPAs [and] he directly gave [it] to Twin Pines. He did not deal directly with any FEO personnel,” Magalong said.

He said Lozada delivered the firearms “very casually” to the NPA rebels in public places like markets and transport terminals.

“The system was simple. He would pick up the firearms from the Twin Pines store in Butuan City then the NPAs would contact him. They would then meet at their agreed meeting place and hand over the guns as if they were [ordinary] baggage,” Magalong said.

“Mr. Lozada claimed he was forced to facilitate the sale of the guns after the insurgents threatened to kill him and his family,” he said.

According to Magalong, the CIDG sought the assistance of the Philippine Army in the search for the missing assault rifles.

On orders from Army chief Lt. Gen. Hernando Irriberi, the military turned over 44 AK-47 rifles that government forces had recovered from NPA rebels during recent encounters in the Caraga region and Western Mindanao, Magalong said.

“Our technicians cannot restore the serial numbers of the 39 other firearms because they were [badly damaged]. But it’s obvious that they came from the same missing shipment of firearms,” he said.

During the forensic examination of the firearms, he said, five of the recovered rifles bore the serial numbers of the AK-47s that Lozada bought from Twin Pines.

Magalong said Lozada had expressed willingness to cooperate with the CIDG in the investigation.

Over 1,000 missing PNP firearms sold to NPA in Mindanao—police exec

Separatist rebels say they get bullets from sources in Army