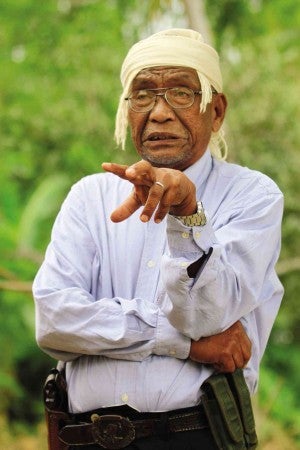 The latest atrocity was Tuesday’s indiscriminate firing of guns in Barangay (village)  Libutan in Mamasapano town, which BIFF spokesperson Abu Misri Mama, in a phone interview, said was retaliatory in nature.

“We were the ones being attacked,” said Mama, who regarded it as a government offensive to earlier BIFF aggression using improvised explosive devices in the adjoining towns of Datu Saudi, Shariff Saidona, and Datu Piang, including Shariff Aguak several weeks earlier.

Ampatuan said peace in Maguindanao “will remain elusive unless poverty is addressed and we have to start with BIFF.”

Ampatuan earlier said she would donate a 3-hectare property or even more to the Department of Environment and Natural Resources (DENR) as a landfill waste disposal site.

During Monday’s tightly secured launching of the solid waste management project at the capital town, Kahal Kedtag, DENR secretary for the Autonomous Region in Muslim Mindanao (ARMM), said the proper disposal of degradable and nondegradable garbage through segregation “is not only an environmental, but a livelihood opportunity.”

Kedtag, who led the initial distribution of trash bins, each costing P2,500, in Shariff Aguak, said some 30,000 units had been programmed for distribution in the entire region this year.

“Environmental protection and the conservation of our natural resources should be everyone’s concern,” Kedtag said of the individual initiative that could be a revenue-generating and calamity-control endeavor.

“There’s money in tree planting and taking good care of water sources in scenic falls, lagoons and lakes, ideal for tourist resorts that a community can commercially avail themselves of instead of resorting to violence and other lawless activities,” Kedtag said.

Mending has urged farmers to use organic farm inputs instead of synthetic fertilizers.

Ampatuan said the dependents of BIFF rebels could also be taught mat weaving, sewing  and other cottage industries.

She said members of the town’s legislative council would have to formulate a resolution that would tap government agencies and experts in training idle and misguided constituents to become productive assets in the community.

Maguindanao Gov. Esmael Mangudadatu shared Ampatuan’s advocacy, saying that the plan to provide livelihood to families of Moro rebels is already being implemented with the help of the Office of the Presidential Adviser on the Peace Process and the Department of Social Welfare and Development.

Mangudadatu, however, assured the public that he supported the mayor’s livelihood plan for BIFF dependents if only to bring back normalcy in the province.

“Like Mayor Ampatuan, I am also worried of the resumption of hostilities in my own province,” said Mangudadatu, whose office is closely monitoring the situation and possible evacuation of affected residents. Charlie C. Señase, Inquirer Mindanao