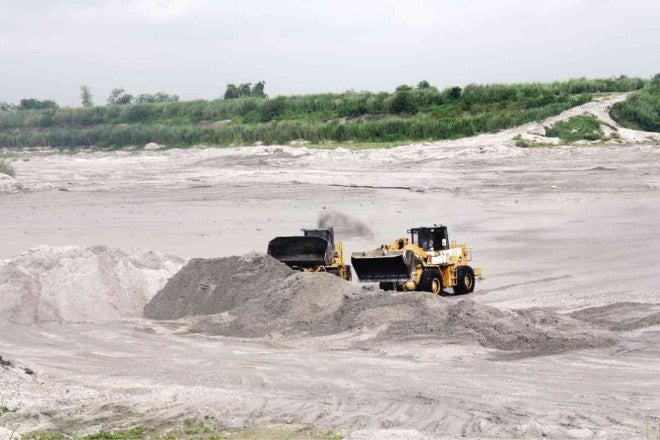 THE SAND that buried lives and property during the Mount Pinatubo disaster years between 1991 and 1997 is now Pampanga province’s “white gold,” with quarrying for the construction industry bringing in P1 billion in taxes and fees to the coffers of the capitol. TONETTE T. OREJAS/INQUIRER CENTRAL LUZON

CITY OF SAN FERNANDO, Philippines— The durability of the FVR Megadike has been put on the spotlight in the run-up to the 23rd anniversary of Mount Pinatubo’s 1991 eruption and amid forecast of strong typhoons that will follow the El Niño weather phenomenon until early next year.

“Given the high volume of rainfall to be expected, the FVR Megadike must be observed and analyzed if it is still competent in holding floodwaters,” Noel Lacadin, chief geologist of the Mines and Geosciences Bureau in Central Luzon region, said at a summit of the Pampanga Disaster Risk Reduction and Management Council on June 5.

The FVR Megadike, named after former President Fidel V. Ramos, was built after lahar, or volcanic sediments remobilized by rain, overflowed from the Pasig-Potrero River on Oct. 1, 1995, burying Bacolor town.

The U-shaped, 56-kilometer long structure turned 17 Bacolor villages into a large catch basin of lahar. The megadike is considered Pampanga province’s last defense when it was completed with a transverse dike in 1997.

Since then, it has undergone retrofitting, with the government spending P3 billion to strengthen it, said Isabelita Manalo, assistant project director of the Department of Public Works and Highways’ (DPWH) Unified Project Management Office-Flood Control Management Cluster.

Manalo said she was confident that the megadike “can withstand ‘Ondoy’-like typhoons.”

But the megadike, Manalo said, needed repair at its western section covering Porac, Sta. Rita and Guagua towns at a cost of P45.1 million this July.

Spillways 1 and 3, at a budget of more than P500 million, are now being built to divide the flow of the Pasig-Potrero River to the eastern and western channels.

Pampanga Gov. Lilia Pineda said she had asked the DPWH to consider the safety of people in the plan to divert the water to the western channel.

The FVR Megadike, she said, has served its purpose, which was to save the capital of San Fernando and outlying towns.

“The problem now is at the downstream,” she said, referring to towns along the tributary of the Pasig-Potrero River that drains out to the Pampanga Bay and finally, Manila Bay.

But basic questions about the megadike remain unanswered.

Now 17 years old, the megadike’s life-span is unknown. After the 1995 lahar breakout and at an original budget of P900 million, the DPWH sent earth-moving machines to the Pasig-Potrero River to clear its silted waterways. The earth dikes became the precursors of the megadike, a DPWH source said.

The integrity of the megadike is shadowed by its past.

“The megadike, which the Kapampangans regard as a monument to their heroic efforts to convince a frustrated and financially exhausted national government to go out on a limb for Pampanga, had instead become another symbol of government ineptitude and folly,” wrote local historian Robby Tantingco.

He was referring to the “innumerable cases of corruption that made the plight of the Kapampangans even more tragic.”

Kelvin Rodolfo, a geologist and professor emeritus at the Department of Earth and Environmental Sciences at the University of Illinois at Chicago, doubted the strength of the megadike because, he said, “it is basically built using lahar, which is loose compared to soil.”

Also, there were no fresh data on what remained of the sediments that the volcano spewed out in its catastrophic blasts in June 1991. Information on this could help local governments anticipate lahar remobilization, Rodolfo said.

Turning the eastern megadike into an asphalted road may need rethinking, a businessman said.

Manalo said the maintenance of the megadike rested on the shoulders of the DPWH office in Central Luzon.

The Pampanga Chamber of Commerce and Industry in 2013 asked the DPWH regional office to assess the safety of the megadike against floods and lahar. The latter did not make its findings public.

Antonio Molano, DPWH regional director, did not reply to queries on Tuesday.

Rodolfo said the government and residents near the volcano should watch out for certain things aside from the megadike.

“If the pattern of previous eruption cycles will be followed, smaller eruptions of lava eventually will fill the caldera and form a new, high-standing dome. But we don’t know how many, or how large, these dome-building eruptions will be, and how long this dome-building will last,” he wrote in a 2011 report.

He said no one could say with certainty if the lahar threat was over.

“Looking elsewhere for clues, the Santa Maria volcano in Guatemala is situated in a humid tropical climate very similar to ours. The Santa Maria eruption in 1902 had the same magnitude as that of Pinatubo in 1991. Significant [lahar flows] occurred at Santa Maria for the next 22 years,” Rodolfo said.

He noted that “great volumes of deposits left by past [lahar flows] may not have all found their final resting places.”

“We must keep in mind that lahar deposits have often been remobilized into new lahar by well-placed typhoons at Mayon, Pinatubo and other volcanoes,” he said.

He also said residents of Botolan, Castillejos and San Marcelino towns in Zambales province “must continue to monitor the state of the dikes, must be especially vigilant during bad weather, and must have contingency plans when large typhoons approach.”