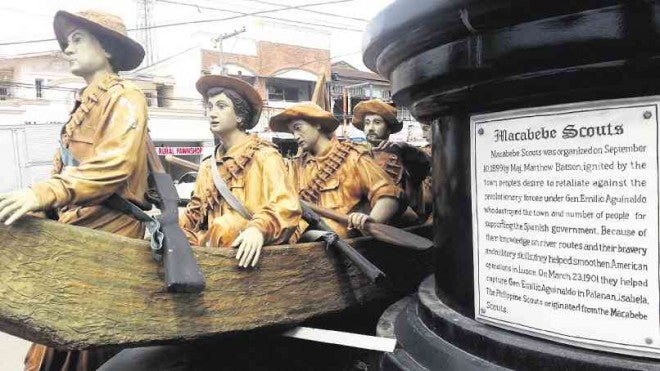 A MONUMENT honoring the Macabebe Scouts is installed in front of the Macabebe town hall in Pampanga province. PHOTOS BY E.I. REYMOND T. OREJAS

Between 1986 and 1990, when Rey Yumang was studying for an economics course at the University of the Philippines in the City of San Fernando in Pampanga province, one of his professors often teased him with a label Yumang himself hardly understood.

Dugong aso was how he was called after the professor learned that he was from Macabebe, an ancient coastal Pampanga town facing Manila Bay.

Literally meaning blood of a dog, the label meant having canine-like loyalty to a point of being a traitor, as Yumang realized. He traced these taunts to the capture of Gen. Emilio Aguinaldo by American soldiers and native troops, called Macabebe Scouts, on March 23, 1901, in the coastal town of Palanan in Isabela province.

For this mission to capture Aguinaldo, American officers made the Macabebes wear the rayadillo uniforms of the revolutionary army. They also used Aguinaldo’s own men to betray him.

The professor continued hurling the unkind tag, as a joke, until 1993, although Yumang had joined the faculty. He could not correct the teacher then for he did not know his own town’s history or what happened to his forebears. What he knew was that the Kapampangan fought oppression, rising in arms even during the Philippine Revolution against Spain and the United States, and martial rule.

GEN. EMILIO AGUINALDO in photo taken from “Kasaysayan: History of the Filipinos”

“The ignominy of 1901 brought the Macabebes to a standstill. It is what the rest of the Filipinos, and even some of the Kapampangan, remember of them,” wrote historian Lino Dizon.

Many Macabebes suffered the same indignation, according to Ian Alfonso, a native of the town and a history researcher at the National Historical Commission of the Philippines.

Some were taunted as “people with long hair,” a claim that had been debunked, Alfonso said. The error came from a popular photograph that mistook Igorot soldiers for Macabebe Scouts who were captured in Cavite after the Battle of Caloocan on Feb. 9, 1899.

“Unfortunately, old Macabebes failed to tell their stories, but there were some who were interviewed in the 1940s. Maybe most of the Macabebes today do not know the story, knowing it only when they are in the Araling Panlipunan [subject] where the capture of Aguinaldo is tackled,” Alfonso said.

“How could they be traitors to Aguinaldo if ever since they never pledged loyalty to him? The concept of the nation during the revolution was still hazy,” he said.

A 1571 event when Tagalog chieftains sided with Spain’s first intrusion into Luzon, leaving Tarik Soliman, a Macabebe chieftain identified as Bambalito in written accounts, as waging a lone resistance, could be the first instance of mistrust of the Macabebes in their neighbors.

“It was the beginning of the loss of trust of the Macabebes in their neighbors who abandoned them in their common cause. Three centuries later, in 1901, the Macabebes settled the score,” said writer Renato “Katoks” Tayag.

American historian John Larkin wrote: “The reputation of the Kapampangan for duplicity is obviously undeserved. Like any other group in the Philippines, they were forced to make some compromises with colonialism. But in the case of soldiering, the Pampangos used their skills in ways that ultimately reflected well on the province. Professional soldiering is an ancient profession, practiced by colonial and noncolonial peoples alike. It should not be confused with patriotism.”

Yumang, 46, and Alfonso, 23, are part of a local movement that has been trying to review history or placing it in the right context. It is strongly supported by the Center for Kapampangan Studies (CKS).

“We were dismayed when we realized how widespread and deep-seated the stereotyping is,” Robby Tantingco, CKS executive director, said. “The Kapampangan silently suffered and endured ostracism. We heard the tag too often and too long we have actually started to believe it ourselves.”

Articles by Dizon and a book by Dennis Edward Flake looked into the circumstances of Macabebe warriors in precolonial times, the Spanish colonial era and American reign.

Macabebe Mayor Annette Flores-Balgan has emerged as a staunch supporter of rewriting Macabebe history. In 2010, the town government built its monument of the Macabebe Scouts. It features sculptures that Balgan had commissioned from Antonio Guintu Jr. of Barangay (village) San Gabriel.

The monument is the second in the town, after that of Tarik Soliman, who, the CKS has asserted, was the first Filipino martyr for freedom. The CKS said Soliman died fighting Spain’s first intrusion in Luzon at the Battle of Bangkusay on June 3, 1571.

So Philippine Independence Day or not, the roles of the Macabebes in the making of the nation have been made distinct.

“It’s about time to regain their lost dignity,” Alfonso said.