Another month of solid hiring could fuel US growth 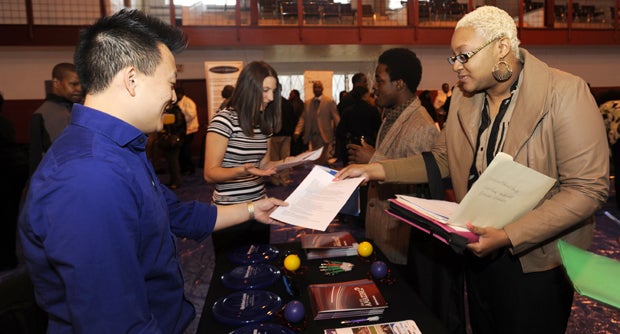 In this April 23, 2014 photo, Luke Gill, of Quicken Loans, left, talks with job candidate Jasmine Boykins at a job fair at the Matrix Center in Detroit. The government issues ist May jobs report on Friday, June 6, 2014. AP

WASHINGTON— Hiring has picked up in the past several months, and another strong job gain could boost hopes that the U.S. economy has rebounded after a grim start to the year.

Economists forecast that employers added 220,000 jobs in May, according to FactSet. That would be below April’s burst of hiring, when 288,000 jobs were added, the most in 2½ years. But it would still be near the monthly average gain this year of 214,000 jobs.

The government will release the May employment report at 8:30 a.m. Eastern time Friday.

If at least 98,000 positions were added in May, the total number of U.S. jobs would finally return to its level in December 2007, when the Great Recession began. Yet that’s hardly cause for celebration: The population has grown nearly 7 percent since then.

Economists at the liberal Economic Policy Institute estimate that 7 million more jobs would have been needed to keep up with population growth. Average wages, meanwhile, have grown just 2 percent a year since the recession ended, below the long-run average annual growth of about 3.5 percent.

Many economists predicted late last year that growth would finally pick up in 2014 from the steady but modest pace that has persisted for the past four years.

But the economy actually contracted in the first three months of this year as a blast of cold weather shut down factories and kept consumers away from shopping malls and car dealerships. The U.S. economy shrank at a 1 percent annual rate in the first quarter, its first contraction in three years.

So far, employers have shrugged off the winter slowdown and have continued to hire. That should help the economy rebound because more jobs mean more paychecks to spend.

Most economists expect annualized growth to reach 3 percent to 3.5 percent in the current second quarter and top 3 percent for the rest of the year.

Most recent economic figures suggest that growth is accelerating.

Auto sales surged 11 percent in May to a nine-year high. Some of that increase reflected a pent-up demand after heavy snow during winter discouraged car buyers. But analysts predict that healthy sales will continue in coming months, bolstered by low auto-loan rates and the rollout of new car models.

Manufacturers are expanding solidly, a private survey showed this week, fueled by gains in production and orders. And a measure of service firms’ business activity reached a nine-month high in May.

The number of people seeking unemployment benefits, meanwhile, has fallen to nearly seven-year lows. Applications are a proxy for layoffs, so the figures indicate that companies are cutting fewer workers. When businesses are confident enough to hold on to staff, they may also step up hiring.

Small businesses are also hiring steadily, according to a survey by the National Federation of Independent Business. That’s a sharp contrast from earlier stages of the recovery. Small firms have added jobs for eight straight months; the NFIB said Wednesday, the longest such stretch since 2006.

Why are there so many Filipino nurses in the US?