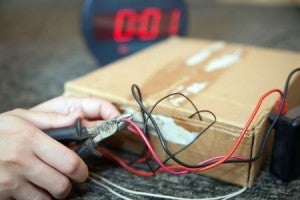 COTABATO CITY – A splinter group of Moro rebels killed a soldier and injured three others by setting off an improvised explosive device in Datu Unsay, Maguindanao, the military said Friday.

Colonel Dickson Hermoso, speaking for the Army’s 6th Infantry Division, said soldiers belonging to the 45th Infantry Battalion were heading for their headquarters from the camp of the Bangsamoro Islamic Freedom Fighters that the government had captured earlier when a bomb exploded underneath their vehicle while they were passing by Barangay (village) Maitumaig around 4 p.m.

The truck’s driver was killed while three more soldiers were injured, he said, without providing their identities.

Hermoso said a hunt was immediately launched for the rebels, who had used a remotely-triggered IED fashioned from an 81-millimeter mortar shell.

Abu Misry Mama, BIFF spokesperson, immediately owned up to the explosion and warned of more attacks in the coming days, “until the military leaves Maguindanao.”