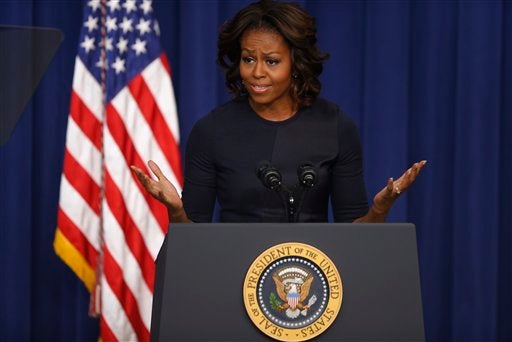 First lady Michelle Obama speaks about college education, Thursday, Jan. 16, 2014, in the Eisenhower Executive Office Building on the White House complex in Washington. The U.S. First Lady praised the American construction industry after it pledged to hire veterans to their business. AP

WASHINGTON, U.S.A.— Michelle Obama says a construction industry pledge to hire 100,000 veterans by 2019 isn’t only the right and patriotic thing to do, it’s also a smart thing for business.

The commitments by 100 companies and associations in construction were being announced Monday at a conference sponsored by the Labor Department and the initiative Joining Forces, a nationwide effort launched by Mrs. Obama and Jill Biden, the wife of Vice President Joe Biden, to rally the United States around military veterans, active duty service members and their families.

Nearly 400,000 veterans and their spouses have been hired under the initiative since it began in 2011, said Mrs. Obama, who was joining Labor Secretary Thomas Perez for the announcement.

“These businesses will also be ensuring that they have the qualified employees they need to keep growing and creating new jobs and strengthening the economy for decades to come,” she said.

Since Joining Forces began, companies with household names from Disney and Starbucks to UPS and Walmart have pledged to hire thousands of veterans. But Monday’s announcement is significant because it is the first time an entire industry has pledged to make sure that giving jobs to veterans “is always part of the mix and is really ingrained in the DNA of the business model,” Perez said in an interview.

Unemployment among the 9/11 generation of veterans, those returning from Iraq and Afghanistan, has been steadily declining during the past two years and stood at 7.9 percent in January, versus an overall unemployment rate of 6.6 percent.

Nearly 180,000 construction jobs were created in the past year, Perez said, and about 1.5 million such jobs are forecast to be added through 2022. Average wages are about $20 an hour, not including benefits, he said.

The industry’s announcement is also timely because of the coming end, later this year, of the U.S. combat role in Afghanistan, Perez said. Thousands of returning troops will be looking for jobs.