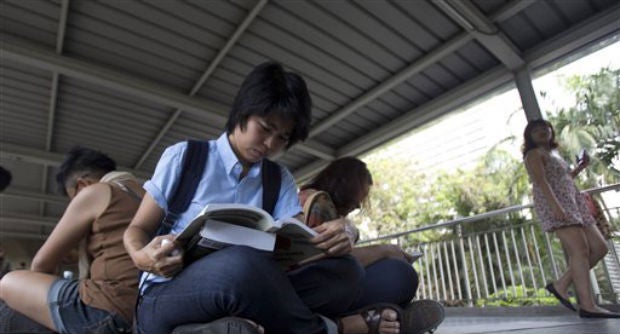 Mook, front left, reads a book along an elevated walkway during a protest in Bangkok, Thailand, Saturday, May 31, 2014. AP

BANGKOK, Thailand—In junta-ruled Thailand, the simple act of reading in public has become an act of resistance.

On Saturday evening in Bangkok, a week and a half after the army seized power in a coup, about a dozen people gathered in the middle of a busy, elevated walkway connecting several of the capital’s most luxurious shopping malls.

As pedestrians trundled past, the protesters sat down, pulled out book titles such as George Orwell’s “Nineteen Eighty-Four”—a dystopian novel about life in a totalitarian surveillance state—and began to read.

In a country where the army has vowed to crack down on anti-coup protesters demanding elections and a return to civilian rule, in a place where you can be detained for simply holding something that says “Peace Please” in the wrong part of town, the small gathering was an act of defiance—a quiet demonstration against the army’s May 22 seizure of power and the repression that has accompanied it.

“People are angry about this coup, but they can’t express it,” said a human rights activist who asked to be identified only by her nickname, Mook, for fear of being detained.

“So we were looking for an alternative way to resist, a way that is not confrontational,” she said. “And one of those ways is reading.”

Their defiance, if you can call it that, is found in the titles they chose. Among them: “Unarmed Insurrection,” ”The Politics of Despotic Paternalism,” ”The Power of Non-Violent Means.”

The junta has banned political gatherings of five people or more. But it is unclear what laws, if any, such low-key protests could be breaking.

The coup, Thailand’s second in eight years, deposed an elected government that had insisted for months that the nation’s fragile democracy was under attack from protesters, the courts and, finally, the army.

The leader of the junta, Gen. Prayuth Chan-ocha, says the military had to intervene to restore order after half a year of debilitating protests that had crippled the former government and triggered sporadic violence which killed 28 people and injured more than 800.

Since taking over, the military has made clear it will tolerate no dissent, and it has launched a major campaign to silence critics and censor the media. The junta has warned all citizens against doing anything that might incite conflict, and the list of targets has been long.

At least 14 partisan television networks have been shut down along with nearly 3,000 unlicensed community radio stations. Independent international TV channels such as CNN and BBC have been blocked along with more than 300 Web pages, including New York-based Human Rights Watch’s Thailand page. Journalists and academics have been summoned by the army. Activists have fled.

A sudden interruption of access to Facebook on Wednesday fueled widespread speculation that the nation’s new rulers were testing their censorship power; the junta, though, insisted it was merely a technical glitch.

Kasama Na Nagara, who works in the financial sector, said about 20 people were participating in the book readings. Saturday marked the third day that the group had organized such a protest. They have been careful to avoid soldiers.

On Friday, the group was supposed to gather on another walkway where they had conducted a reading a day earlier. But when troops showed up, they called it off.

Human Rights organizations are deeply concerned over how far the clampdown will go.

Some people have begun using encrypted chat apps on their smartphones, for fear of being monitored. And at least one major bookstore in Bangkok, Kinokuniya, has pulled from its shelves political titles that could be deemed controversial.

So far, Orwell’s “Nineteen Eighty-Four,” in which authorities operating under the aegis of “Big Brother” fit homes with cameras to monitor the intimate details of people’s personal lives, is not among them.

“But we have Big Brother watching us now,” Kasama said. “It has become too risky to speak out. It’s sad. But it’s safer to be silent in Thailand right now.”

On Sunday, thousands of troops deployed in multiple locations across Bangkok to stop expected protests by a separate group of anti-coup protesters, raising fears of possible violence if the soldiers crack down. Authorities closed several elevated “Skytrain” stations to try to prevent large groups from gathering.

So far, the other anti-coup protests have been relatively small. As many as 1,000 people marched through Bangkok and scuffled with troops several times last week, though no injuries have been reported.

Those protesters have carried hand-made signs and banners with messages like “No dictatorship” and “Pro-Democracy” and “Anti-Coup.” Some have shown up with masks of prominent political figures to conceal their faces and black tape across their mouths to protest the increasing repression.