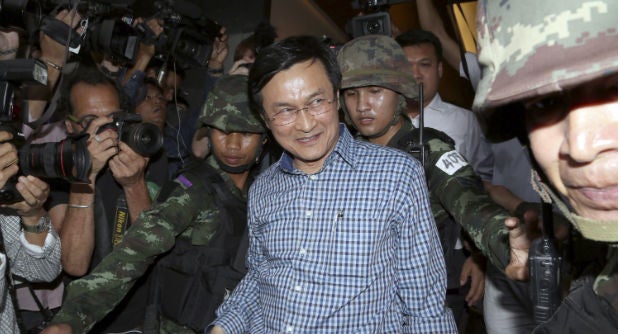 Former Thai Education Minister Chaturon Chaisang walks after being detained by soldiers after a news conference at the Foreign Correspondents’ Club of Thailand in Bangkok on Tuesday, May 27, 2014. Thai troops detained the Cabinet minister who defiantly emerged from hiding on Tuesday to condemn last week’s military coup and urge a return to civilian rule, in the first public appearance by any member of the ousted government. AP

BANGKOK—Thai soldiers swooped to detain a fugitive former cabinet minister on Tuesday after he emerged from hiding to become the first member of the ousted government to publicly denounce a military coup.

In dramatic scenes played out in front of stunned journalists, Chaturon Chaisang, education minister in a government ousted by the army last week, was marched out of the Foreign Correspondents’ Club of Thailand by troops.

The veteran politician was holding a press conference in defiance of an order for him to report to the junta.

He decried the coup-makers as inexperienced, warning of burgeoning resistance to the power grab as well as the potential for the army to “be more cruel than you might expect.”

Analysts say the junta’s move to detain scores of political figures from across the kingdom’s bitter divide is aimed at quelling potential opposition to the May 22 coup.

Despite warnings by the top general of a widening crackdown on dissent, protesters have been gathering in small but vehement rallies in Bangkok.

They pose a direct challenge to a ban on political assemblies—under martial law—which is backed by sweeping curbs on the media and an overnight curfew.

But in one tentative sign of a return to a semblance of normality, the junta said it was shortening the curfew to midnight until 4 a.m. from Wednesday.

An army spokesman also said former premier Yingluck Shinawatra had been released by the military and allowed to return home, the first official confirmation of her whereabouts since she was detained last week after reporting to the junta.

Yingluck, who was removed from office by a controversial May 7 court ruling, signed an agreement to report her movements to the military, Col. Winthai Suvaree told reporters.

Chaturon was among the first batch of people summoned by the military in the hours after it took power, citing the need to restore peace and order to the kingdom following months of sometimes violent protests against Yingluck’s government.

He refused to report to the authorities, telling a packed press conference Tuesday that he wanted to show his opposition to the coup—the latest in a string of 19 actual or attempted army takeovers in the kingdom’s modern history.

“The coup is not a solution to problems of conflict in Thailand,” he told reporters, cautioning “from now on there will be more and more resistance.”

Army spokesman Winthai said the ex-minister’s case will now be handled by a military court.

Thailand has been unable to heal a festering political rupture since 2006 when Yingluck’s billionaire older brother Thaksin Shinawatra was ousted by another military coup.

His supporters, drawn mainly from the rural north and northeast, have propelled Thaksin-led or aligned parties to power in every election since 2001.

But he is hated by a military-backed royalist establishment, Bangkok middle class and southerners who see him as corrupt and a threat to the monarchy.

The path toward the army takeover began late last year when anti-Thaksin forces launched protests in Bangkok calling for Yingluck’s government to be thrown out as the start-point for a wider purge of her family’s influence on Thai politics.

At least 28 people died and hundreds more were wounded in violence linked to the rallies.

Some experts believe a struggle is unfolding to decide who will be in power when the revered king’s more than six-decade reign eventually ends.

The succession issue cannot be openly discussed in Thailand because of strict royal defamation laws. The junta said Sunday that any cases under those rules would now be tried in military courts.

The prolonged political turmoil has battered the nation’s reputation as a tourist destination and chipped away at its once-dynamic economy.

The Thai navy chief now in charge of tourism on Tuesday told reporters tourist numbers had plummeted by 20 percent but said foreign visitors would soon return.

“The fact is we still live happily, more happily than the period before we announced the martial law,” Admiral Narong Pipatanasai said.