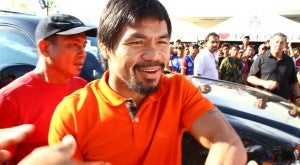 MANILA, Philippines—Sarangani Representative and welterweight champion Manny Pacquiao remains as the richest congressman in the country and is the only billionaire in the House of Representatives.

Pacquiao had a net worth of P1.4 billion in 2013, down from P1.77 billion in 2012, according to his filed statement of assets and liabilities net worth (SALN) made available by the chamber on Wednesday.

Pacquiao is the target of the Bureau of Internal Revenue for allegedly failing to pay the right income taxes in his boxing bouts from 2008 to 2009.

After Pacquiao, the richest member of the House of Representatives is former first lady and now Ilocos Norte Rep. Imelda Marcos, who has a net worth of P922.8 million, the same as the previous year.

The third-richest congressman is Speaker Feliciano Belmonte Jr. of Quezon City, with a wealth of P819.749 million, or higher than his P817.574 million in 2012.

The only newbie solon in the top 10 is Maguindanao Rep. Zajid Mangudadatu, the brother of Maguindanao Governor Esmael Mangudadatu. He has a net worth of P215.850 million.

At least 61 representatives belong to the bracket that have a little over a million to less than P10 million in wealth.

Only five solons have a net worth of less than a million pesos. 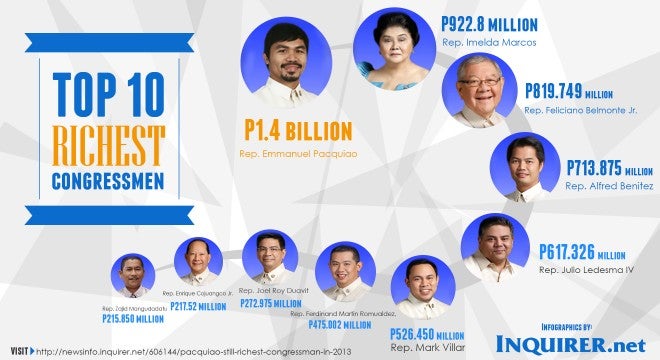