US soldier freed from captivity in Afghanistan 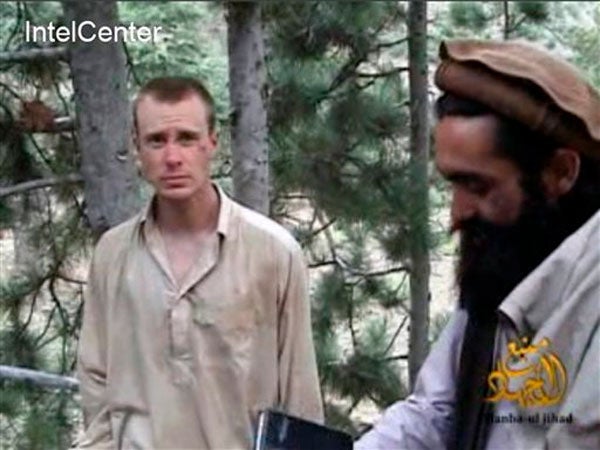 This file image provided by IntelCenter on Dec. 8, 2010, shows a frame grab from a video released by the Taliban containing footage of a man believed to be Bowe Bergdahl, left. Saturday, May 31, 2014, U.S. officials say Bergdahl, the only American soldier held prisoner in Afghanistan has been freed and is in U.S. custody. AP

WASHINGTON — The only American soldier held prisoner in Afghanistan has been freed by the Taliban in exchange for the release of five Afghan detainees from the U.S. prison at Guantanamo Bay, Cuba, Obama administration officials said Saturday.

Sgt. Bowe Bergdahl was handed over to U.S. special forces by the Taliban Saturday evening, local time, in an area of eastern Afghanistan, near the Pakistan border. Officials said the exchange was not violent and the 28-year-old Bergdahl was in good condition and able to walk.

“While Bowe was gone, he was never forgotten,” President Barack Obama said in a statement from the White House Rose Garden, where he was joined by Bergdahl’s parents. “The United States of America does not ever leave our men and women in uniform behind.”

The handover followed indirect negotiations between the U.S. and the Taliban, with the government of Qatar serving as the go-between. Qatar is taking custody of the five Afghan detainees that had been held at Guantanamo Bay.

According to a senior defense official traveling with Defense Secretary Chuck Hagel in Singapore, once Bergdahl climbed onto the noisy helicopter he took a pen and wrote on a paper plate, the letters “SF?” — asking the troops if they were special operations forces.

They shouted back at him over the roar of the rotors: “Yes, we’ve been looking for you for a long time.”

Then, according to the official, Bergdahl broke down and cried.

Bergdahl, of Hailey, Idaho, is believed to have been held by the Haqqani network since June 30, 2009. Haqqani operates in the Afghanistan-Pakistan border region and has been one of the deadliest threats to U.S. troops in the war. The network, which the State Department designated as a foreign terrorist organization in 2012, claims allegiance to the Afghan Taliban, yet operates with some degree of autonomy.

Officials said Bergdahl was transferred to Bagram Air Field, the main U.S. base in Afghanistan, for medical evaluations. A defense official said he would be sent to Germany for additional care before eventually returning to the United States.

The defense official said Bergdhal was tentatively scheduled to go to the San Antonio Military Medical Center where he would be reunited with his family. The military was working Saturday to connect Bergdahl with his family over the telephone or by video conference.

Several dozen U.S. special operations forces, backed by multiple helicopters and surveillance aircraft, flew into Afghanistan by helicopter and made the transfer with the approximately 18 Taliban members. The official said the commandos were on the ground for a short time before lifting off with Bergdahl.

The official added that the U.S. still believes that Bergdahl was being held for the bulk of the time in Pakistan, but it was not clear when he was transported to eastern Afghanistan.

All the officials insisted on anonymity in order to discuss details of Bergdahl’s transfer. 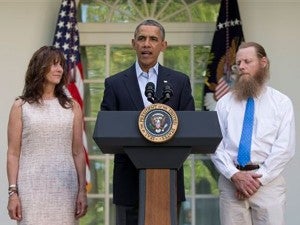 President Barack Obama speaks with Jani Bergdahl, left, and Bob Bergdahl, right, the parents of U.S. Army Sgt. Bowe Bergdahl, in the Rose Garden of the White House in Washington, Saturday, May 31, 2014, after the announcement that Bowe Bergdahl has been released from captivity. AP

Bergdahl’s parents, Bob and Jani, had been in Washington on a previously scheduled visit when they received a call Saturday from Obama informing them that their son had been freed.

As they stood with Obama in the Rose Garden hours after their son’s release, Bob Bergdahl, who grew a long, thick beard to honor his son, said Bowe Bergdahl was having trouble speaking English after his rescue. The elder Bergdahl had worked to learn Pashto, the language spoken by his son’s captors, and delivered him a message in that language.

Switching back to English, he said “the complicated nature of this recovery will never really be comprehended.”

The news of Bergdahl’s release spread quickly in his hometown in southern Idaho, and residents immediately began making plans for a welcome-home celebration.

An annual event called “Bring Bowe Back” scheduled for June 28 was quickly renamed “Bowe is Back.”

“It is going to be Bowe’s official welcome-home party even if he’s not quite home yet,” organizer Stefanie O’Neill said Saturday.

The circumstances surrounding Bergdahl’s capture remain something of a mystery. There has been some speculation that he willingly walked away from his unit, raising the question of whether he could be charged with being absent without leave (AWOL) or desertion.

In 2012, Rolling Stone magazine quoted emails Bergdahl is said to have sent to his parents that suggest he was disillusioned with America’s mission in Afghanistan, had lost faith in the U.S. Army’s mission there and was considering desertion. Bergdahl told his parents he was “ashamed to even be American.”

The Associated Press could not independently authenticate the emails.

Were Bergdahl to be charged with desertion, the maximum penalty he would face is five years in prison and a dishonorable discharge, if it’s proven that he deserted with the intent to avoid hazardous duty or to shirk important service. A case of AWOL, ended by the U.S. apprehending him, would not require proof that he intended to remain away permanently. The maximum punishment for that would be a dishonorable discharge and 18 months’ confinement, according to military justice experts.

The US has long been seeking Bergdahl’s release, but there was renewed in his release as Obama finalized plans to pull nearly all American forces out of Afghanistan by the end of 2016.

“It is our ethos that we never leave a fallen comrade. Today we have back in our ranks the only remaining captured soldier from our conflicts in Iraq and Afghanistan. Welcome home Sgt. Bowe Bergdahl,” said Gen. Martin Dempsey, chairman of the Joint Chiefs of Staff.

Officials said the Taliban signaled to the US in November that they were ready to start new talks on the issue of detainees. After the US received proof that Bergdahl was still alive, indirect talks began, with Qatar sending messages back and forth between the two parties.

The talks intensified about a week ago, officials said, resulting in Bergdahl’s release and the transfer of the Afghan detainees.

The five Guantanamo detainees departed the base on a US military aircraft Saturday afternoon. Under the conditions of their release, the detainees will be banned from traveling outside of Qatar for at least one year.

Obama and the emir of Qatar spoke last week about the conditions of the release, which have been codified in a memorandum of understanding between the two countries, officials said.

The administration is legally required to notify Congress in advance about plans to release Guantanamo detainees. An administration official said lawmakers were notified only after US officials knew they had Bergdahl, but before the transfers took place.

Two Republican lawmakers said Obama violated US laws when he approved the exchange. Rep. Howard “Buck” McKeon of California and Sen. James Inhofe of Oklahoma said the law required Obama to notify Congress 30 days before any transfer of terrorists from the US detention facility at Guantanamo Bay, Cuba. In response, the White House said that officials considered what they called “unique and exigent circumstances” and decided to go ahead with the transfer in spite of the legal requirement.

The detainees are among the most senior Afghans still held at the prison. They are:

—Abdul Haq Wasiq, who served as the Taliban deputy minister of intelligence

—Mullah Norullah Nori, a senior Taliban commander in the northern city of Mazar-e-Sharif when the Taliban fought U.S. forces in late 2001

—Mohammed Nabi, who served as chief of security for the Taliban in Qalat, Afghanistan, and later worked as a radio operator for the Taliban’s communications office in Kabul

—Mohammad Fazl, whom Human Rights Watch says could be prosecuted for war crimes for presiding over the mass killing of Shiite Muslims in Afghanistan in 2000 and 2001 as the Taliban sought to consolidate their control over the country.

Taliban and Afghan officials could not be reached for comment. In Pakistan, Foreign Ministry spokeswoman Tasnim Aslam said her government was “not aware of” Bergdahl’s release or the negotiations leading up to it. She declined to comment further.