Be careful what you pray for: Here comes the rain | Inquirer News
Close
menu
search

Be careful what you pray for: Here comes the rain 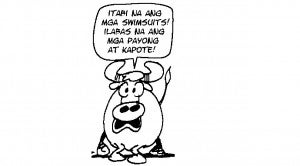 MANILA, Philippines—You asked for it.

After fervently praying for rain like modern-day Elijahs, the heavens have declared: Rainy days are coming.

The weather bureau on Saturday announced that the country was transitioning to the rainy season, with the gradual shifting of wind patterns over the West Philippine Sea.

“Current wind patterns over the West Philippine Sea are now [moving in a] southerly direction and are expected to gradually shift southwest. This event signals the beginning of the rainy season over the western part of the country,” the Philippine Atmospheric, Geophysical and Astronomical Services Administration (Pagasa) said.

The onset of the rainy season is expected in the first or second week of June.

In a special outlook for the wet months, the weather bureau said the transition stage was “manifested by warm and humid conditions associated with frequent rain showers and thunderstorms in the afternoon and early evening.”

Pagasa said its recent analyses showed persistent development of convective clouds over the West Philippine Sea, expected to be more prevalent and large in scale in the coming days.

“It will contribute significantly to the seasonal rain over most areas in the western part of the country,” it said.

“In consideration of climate model outputs, Pagasa foresees the imminent onset of the rainy season in early June,” it added.

But the full development of the southwest monsoon season is expected to commence by mid-June, associated with moderate to heavy rain, Pagasa said.

Pagasa said it would continue to monitor the development of the southwest monsoon and would issue updates.

It advised national and local disaster risk reduction and management councils to take appropriate action and closely follow the next Pagasa advisories.

Based on Pagasa’s 24-hour weather outlook, the intertropical convergence zone, a breeding ground of tropical cyclones, continues to affect Mindanao, bringing general cloudiness over the island.

On the other hand, the ridge of a high-pressure area, which generally brings fair weather, is seen extending across the eastern sections of Luzon, the weather bureau said.

Mindanao, according to Pagasa, will have cloudy skies, with light to moderate rain showers and thunderstorms.

“Metro Manila and the rest of the country will be partly cloudy to at times cloudy, with isolated rain showers or thunderstorms,” it added.

Coastal waters throughout the archipelago will be slightly to moderately rough, Pagasa said.