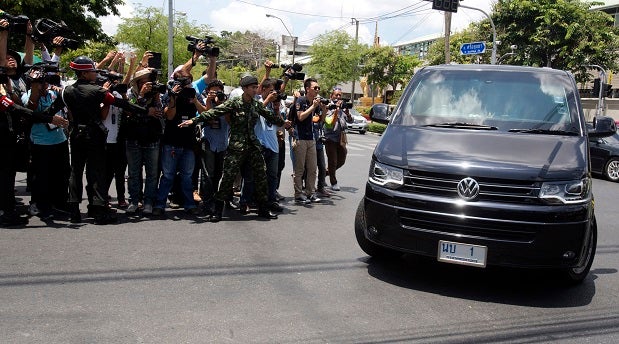 Thai former Prime Minister Yingluck Shinawatra, in a van, arrives to report to Thailand’s ruling military in Bangkok, Thailand, Friday, May 23, 2014. The military on Friday summoned the entire ousted government and members of the politically influential family at the heart of the country’s long-running conflict, a day after it seized control of this volatile Southeast Asian nation in a non-violent coup. It was unclear why more than 100 people, including the ousted prime minister and several members of the influential Shinawatra family, were ordered to report to the military, which said it was summoning the high-profile figures “to keep peace and order and solve the country’s problems.”(AP Photo/Sakchai Lalit)

BANGKOK—Former premier Yingluck Shinawatra has been detained by leaders of Thailand’s military junta, a source in her party said Saturday as the army prepared to brief the media for the first time on a coup criticized worldwide.

The fate of Yingluck and scores of other figures in the now-deposed government and her Puea Thai party has been a mystery since they were summoned by the army early Friday as it tightened its grip on the country.

“It is confirmed that she was detained by the military since she reported to the junta yesterday,” said the source, who had served in Yingluck’s government and was present when she turned herself in.

He said her whereabouts remained unknown.

An army spokesman was due to hold the junta’s first press briefing since the takeover at 10:30 am (0330 GMT).

In the latest twist in years of escalating political turmoil, the kingdom’s tough-talking army chief Prayut Chan-O-Cha deposed the civilian government Thursday, saying he acted to quell the escalating strife.

The United States, which has led international calls for restoration of civilian rule, took its first concrete steps, saying it would suspend $3.5 million in military assistance for the country, about one-third of its aid.

Under the new regime civil liberties have been drastically curbed, most of the constitution suspended, and a night-time curfew imposed as the army cleared rival political protesters from Bangkok’s streets.

Late on Friday, the army sent dozens of troops into central Bangkok to clear scores of anti-coup demonstrators.

Demonstrators had chanted slogans and held banners denouncing the coup — one read, “We will never lick dictatorship’s boots” — violating military bans on political gatherings and criticism of the takeover.

Witnesses reported seeing several people taken away by troops but no clashes were seen.

Yingluck was removed from office in a controversial court ruling earlier this month that set the stage for the takeover.

She was among more than 150 prominent figures from both sides of Thailand’s bitter political divide summoned by the army.

However, most appear to have been Puea Thai members or prominent supporters.

They were also banned from leaving the country, a step analysts said was aimed at averting formation of a government-in-exile.

He was elected prime minister in 2001 but deposed in 2006 in a military coup, fleeing into exile two years later to avoid a corruption conviction.

However, his family and allies have continued to triumph at the ballot box.

The tensions spiralled in early May with Yingluck’s dismissal.

The 2006 coup that ousted Thaksin saw the detention by several top figures in his government and the launch of corruption proceedings, including the charges against Thaksin.

Europe, Japan, and UN chief Ban Ki-moon have joined the calls for civilian control to be restored.

US Secretary of State John Kerry said there was “no justification” for a coup that would have “negative implications” for US relations, and demanded early elections.

Thaksin’s so-called “Red Shirt” supporters had earlier warned a government overthrow could trigger civil war and all eyes are on the movement’s response.

While the numbers taken into custody far exceed those detained in 2006, there has so far been no sign of significant tank or troop deployments, in contrast to eight years ago.

The coup has brought a mixed reaction from Thais, with some expressing hope it will bring stability, while others said they were uneasy about the threat to democracy.

Thailand’s democratic development has now been interrupted by 19 actual or attempted coups since 1932, interventions that traditionally require the monarchy’s approval.

It was unclear whether the monarchy headed by 86-year-old King Bhumibol Adulyadej had blessed Prayut’s takeover.

Paul Chambers, research director for the Institute of Southeast Asian Affairs at Thailand’s Chiang Mai University, said the detentions were aimed at throttling opposition to the coup.

“Yes this is a purge of potential threats to the coup government,” he said.

“Prayut has to shore up his power, especially since we have yet to see monarchical endorsement of this coup.”

Political observers expect the junta to hold power for at least a year — as it did after the 2006 coup — and draw up a new constitution to curb the political dominance of Thaksin and his allies.