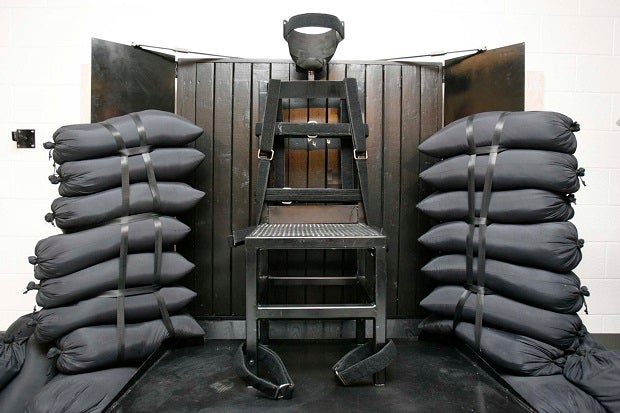 In this June 18, 2010, file photo, the firing squad execution chamber at the Utah State Prison in Draper, Utah, is shown. AP

CHEYENNE, United States—Prompted by the shortages of available drugs for lethal injections, lawmakers in the western state of Wyoming are considering changing state law to permit execution of condemned inmates by firing squad.

A Wyoming legislative committee has directed its staff to draft a firing-squad bill for consideration ahead of next year’s legislative session starting in January.

Lethal injection is becoming increasingly difficult for states to perform as pharmaceutical companies withhold drug compounds that states traditionally have used. Some inmates have raised constitutional challenges as states have turned to untried compounds. Last month, Oklahoma inmate Clayton Lockett died of a heart attack more than 40 minutes after corrections officials there started trying to administer drugs at his execution. President Barack Obama called the Lockett incident deeply troubling and said he had asked his attorney general to review the application of the death penalty.

Lawmakers in Utah also may consider a return to firing squads for civilian executions. A Republican state lawmaker there recently announced that he intends to introduce firing-squad legislation in his state’s next legislative session in January as well.

“In the event that we had an execution scheduled and we couldn’t carry it out as a result of lack of substances, I suggested to the Joint Judiciary that we may want to consider having an alternate means of execution, such as the firing squad,” Lampert said Wednesday.

Wyoming has no execution drugs on hand, Lampert said.

Republican state Sen. Bruce Burns had proposed a bill in the state’s legislative session earlier this year to change state law to allow the use of firing squads. He’s a member of the judiciary committee.

Burns said Wednesday the committee intends to consider the firing-squad approach at its next meeting in July. He floated a bill in the legislative session early this year calling for allowing use of the firing squad, but it failed an introductory vote.

Burns said his fellow lawmakers increasingly seem to recognize that the state needs to act.

Burns said he believes using the firing squad would be a preferable means of execution to lethal injection, in which inmates feel the needle and then have to wait for drugs to take effect.

Wyoming has only one inmate on death row: Dale Wayne Eaton, 69, is pressing a federal appeal of the state court death penalty he received in 2004 for the murder of Lisa Marie Kimmell, 18, of Montana.