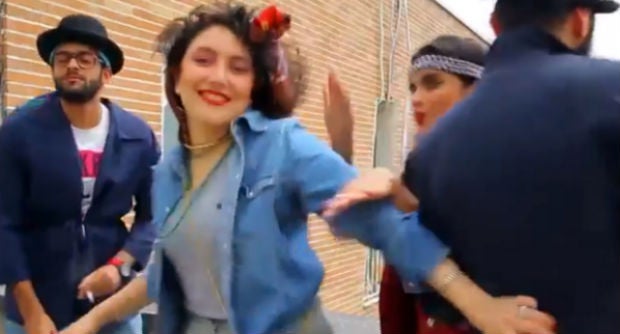 In this frame grab taken from video posted to YouTube, people dance to Pharrell Williams’ hit song “Happy” on a rooftop in Tehran, Iran. Police in Iran have arrested six young people and shown them on state television for posting the video. While the song has sparked similar videos all over the world, in Iran some see the trend as promoting the spread of Western culture. And women are banned from dancing in public or appearing outside without the hijab in the Islamic Republic. AP

TEHRAN, Iran—An Internet video of six young Iranian men and women dancing to Pharrell Williams’ “Happy” has led to their arrests, showing how far Tehran will go to halt what it deems to be decadent Western behavior — despite the views of its moderate president.

Criticism outside Iran was predictably swift Wednesday, with calls for freedom for the jailed youths zipping around social media. Williams tweeted: “It’s beyond sad these kids were arrested for trying to spread happiness.”

A tweet posted Wednesday evening on President Hassan Rouhani’s account seemed to address the controversy, even if it stopped short of mentioning the video or the arrests directly.

“#Happiness is our people’s right,” it said. “We shouldn’t be too hard on behaviors caused by joy.”

The widely followed account appears to reflect Rouhani’s positions. Iranian media in the past quoted Rouhani as saying the account is authentic. At the same time, a senior Rouhani adviser said last year that the president had such an account only during the presidential campaign and that Rouhani’s views are represented by his official website.

Other social media posts suggested at least some of the dancers had already been released, although there was no independent confirmation from authorities.

The case was another reminder of the tensions that exist at the highest levels of Iranian power, with hard-liners determined to maintain the status quo while moderates try to push through change — be it improved relations with the West or a loosening of morality clampdowns at home.

Hard-liners are increasingly challenging Rouhani as the country negotiates a nuclear deal with world powers. The president campaigned for greater cultural and social freedoms in his bid to succeeded Mahmoud Ahmadinejad last year.

As recently as Saturday, he articulated a moderate stance about the Internet, which remains tightly regulated by Iranian authorities.

Sites such as YouTube and Facebook are blocked by censors, though many young and Web-savvy Iranians use proxy servers or other workarounds to bypass the controls.

“We should see the cyberworld as an opportunity,” said Rouhani, according to the official IRNA news agency. “Why are we so shaky? Why don’t we trust our youth?”

Hard-liners accuse Rouhani of failing to stop the spread of what they deem “decadent” Western culture in Iran. Last week, hard-liners marched over women not wearing hijabs and dressing provocatively.

While Rouhani pursues a policy of social and cultural openness, hard-liners say the government should be tough to those who challenge interpretations of Islamic norms. They accuse Rouhani of showing leniency and too much tolerance toward those who question Islamic sanctities or women who are not sufficiently veiled.

The dancing Iranians would seem right at home in the West — or indeed in the music video that accompanies Williams’ song. Fans have posted similar videos from around the world, showing people dancing down streets and smiling in choreographed crowds.

But in Iran, some see the trend as promoting the spread of Western culture, as laws in the Islamic Republic ban women from dancing in public or appearing outside without covering her hair with the hijab. The government also bans some websites.

The video that got them in trouble shows hip twentysomethings hamming it up for the camera in sunglasses and silly clothes on Tehran rooftops and alleyways. One of the bearded men goofily dips his female dancing partner.

None of the three women in the video wears a hijab.

The video was posted online several weeks ago. It includes the participants’ first names in a credit roll with outtakes. They describe themselves as Williams fans, adding: “‘Happy’ was an excuse to be happy. We enjoyed every second of making it.”

Tehran Police Chief Hossein Sajedinia confirmed the arrests on state TV late Tuesday in a report that blurred images from the video and then showed the six with their backs turned toward the camera.

“They were identified and arrested within six hours,” Sajedinia said.

In the TV broadcast, those arrested said they had been deceived and that the video was not meant to be posted on the Internet.

“They had told us that this video won’t be released anywhere and that it was for our own joy,” one of the women said.

Another detainee said: “They invited us to appear on the video to practice acting.”

It wasn’t immediately clear if the six faced criminal or civil charges, or if they had lawyers.

On the broadcast, Sajedinia warned Iranian young people that police will confront those who challenge Islamic and social norms.

“The youth should try not to be deceived by these people under pretexts such as acting or singing,” he said.

The last time there was a crackdown on music was on Dec. 2, 2013, when Iran’s Morality Police temporarily arrested popular rapper Amir Tataloo, whose songs authorities deem inappropriate. He was released two days later.