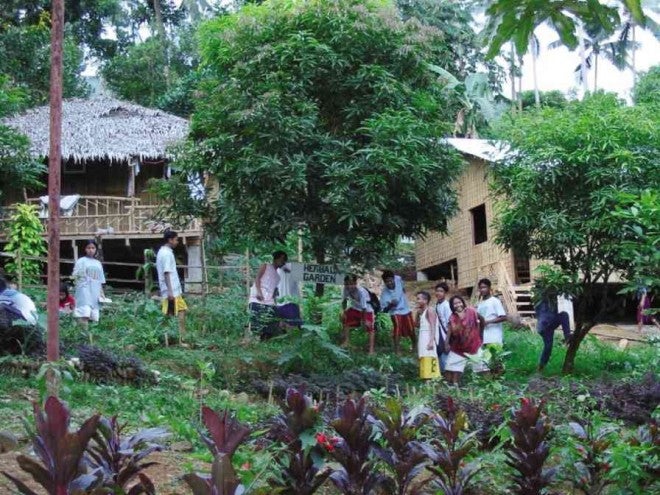 Summoned by a blare of the budyong, an instrument made from animal horn, the community of some 100 mainly Mangyan people and their guests took their seats around an area marked for the day’s big event at Tugdaan Mangyan Center for Learning and Development.

It was the graduation ceremony for 28 high school students and 26 Mangyan adults who had completed a coffee production course at the 200-hectare facility at the foot of Mt. Halcon in Naujan town, Oriental Mindoro province.

“Together, we proudly thank Kapwan Agalape’t for the many blessings he has given us for the whole year,” said Ligayan Lintawagin, overall coordinator of Tugdaan.

A group of elders called apalaki chanted while walking around an open space, bearing lighted charcoal pieces to clean the place with smoke. They invoked the spirits for blessings in a ritual called tawtaw.

Symbolic offerings of water, fire, air and earth, along with medals and certificates were offered to Kapwan Agalape’t (Almighty God).

Lintawagin said the celebration also marked the 25th founding year of Tugdaan. Citations were to be presented to those who had helped establish the school, its partners, volunteers and outstanding parents and alumni.

“Tugdaan is an Alangan term which means seedbed to depict an education that is based on our culture, needs, realities and aspirations,” she said.

The students come from the Mangyan subtribes of the Hanunuo, Tadyawan, Iraya and Alangan, which settled in the towns of Mansalay, Victoria, Socorro, Baco, San Teodoro and Puerto Galera in Oriental Mindoro.

Under the four-year high school program, they learn how to preserve their culture, assert their rights, and cultivate their land alongside taking subjects prescribed by the Department of Education.

Lintawagin said the school calendar followed the Mangyan cycle of planting and harvest seasons. Classes start during the agtugda (planting season) in June, which she described as “the beginning of planting new knowledge and imparting of our traditional values and wisdom to our children.”

The cycle ends during the agani (harvest season) in March when the Mangyan community celebrates the agpamago or thanksgiving ritual for a bountiful yield.

Agpamago, which takes place in the evening of graduation day, was also the time of “joyful harvest of learning” from school, Lintawagin said.

She said the graduating graduates danced the taruk to the beating of gongs and pounded the floor with branches of trees in imitating what their elders did in kaingin (slash-and-burn) farming.

One of the graduates, Vilma Talibukas, was happy but sad to leave because the school had been her home for the past four years. She wore a red kerchief to cover the upper part of her body and a skirt made of rattan nito.

Girls like her usually get pregnant at an early age and drop out of school. “Gone are the days of early marriages for girls like me. I would be serving my community as we were molded to do,” Talibukas said.

Certificates and varieties of assorted seeds were handed out to the 26 Mangyan adults.

“We source the products from Mangyan farms that are raw, fresh, all-natural and free from any fertilizer, pesticide or preservative,” said Ailyn Lintawagin, coordinator of Tugdaan’s sustainability program.

“Social entrepreneurship like food production is unique in Tugdaan,” said Leonor Oralde-Quintayo, chair of the National Commission on Indigenous Peoples and keynote speaker during the graduation rites.

“We also celebrate because the community is able to sustain their vision and spirit of the center,” said Benjamin Abadiano, a 2004 Ramon Magsaysay awardee for emergent leadership, who founded Tugdaan.

He said the center started as a nonformal school with subjects like leadership, community organizing, cooperative management, health and paralegal.

“In the last six years, Tugdaan has been providing training to indigenous peoples communities like the Ati in Tarlac, Agta in Quirino, Ati in Boracay and those in Mindanao,” Abadiano said.

This is the dream that high school valedictorian Anchelle Lintawagin and other graduates echoed in their graduation theme song. It is a “world that respects who we are, that knows and sees our culture as a glimpse into our hearts,” they sang.