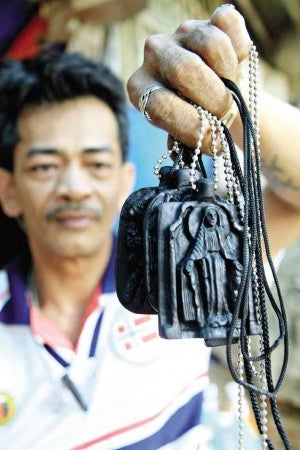 Rodel Basilio, 47, is carving amulets and describes his work as a sacred calling bestowed on him by Mt. Banahaw.

“But not all people who come here can have one of my carved amulets. Not even for lots of money,” said Basilio, a native of Sta. Cruz town, Laguna province.

The former painter of murals for Manila’s movie house has a shop and house along a rocky path that leads to a venerated place called Kalbaryo in Barangay (village) Sta. Lucia in Dolores town, Quezon province.

An amulet, also known as anting-anting or gamit within Basilio’s circle, is among the most sought-after mystical items in Banahaw. It reflects a deep-seated belief among Banahaw devotees that the mountain, which they consider sacred, is host to spirits, elements and otherworldly beings.

In Filipino folklore, amulets include miniature statues of saints, pieces of metal engraved with Latin words and strange figures, pieces of cloth with drawings, rings, pendants or even recited words that are believed to repel evil or bad luck.

Some items are deemed magical charms to attract the opposite sex or make a business flourish.

Basilio said he learned amulet-making more than two decades ago. He said he was fed up by what he called the “boring and unfulfilling” routine of a painting job in Manila.

He narrated one field trip he took to relax his mind, which brought him to Barangay Sta. Lucia at the foot of Banahaw.

“I have long dreamed of a place with crystal-clear water and a descending image of the Virgin Mary,” Basilio said. At Santisima, one of the many puesto or sacred spots for religious pilgrims in Sta. Lucia and nearby Barangay Kinabuhayan, he found the likeness of his dream.

Struck by the “amazing divinity” of the place, Basilio decided to settle in the village with his family where he eventually learned amulet carving, using an indigenous hardwood called dignum, which turns black through the years.

Dignum is the same wood species used to make the cross of Jesus Christ, he said, citing a local folktale.

“This kind of wood is several hundred years old, a fossilized wood. This is already rare. And one has to perform a sacred ritual to successfully unearth it from the ground,” he said.

The ritual includes candlelighting and saying prayers to the spirit to guide his hands and eyes while extricating the buried wood.

Basilio said the wood species could still be found in some hidden areas of Banahaw in Dolores and Lucban towns.

Basilio’s carved amulets are sought by believers and collectors from different parts of the country. Some of his designs include Tres piko, naked Santo Niño, Miraculous Virgin Mary and the face of Jesus.

A specially designed piece, which takes only a couple of hours to finish, costs from P3,000 to P4,000.

Before making an amulet, Basilio said he would first assess the character and true intention of the person. He said he would be deemed an accomplice to the wrongdoing if the amulet holder had evil designs in his mind.

“I will not allow myself to become a party in hurting or making other people ill,” he said.

Before handing over a newly finished amulet, Basilio said he would engage the new holder in a one-on-one talk to impart the rules of ownership.

“I also convey the process of safekeeping, how to ‘recharge,’ the prayers and other information,” he said.

Basilio strongly objected to the practice of “testing” an amulet during Holy Week. “If the amulet holder really believes in its power, why still the need for a test? If one tests his gamit, it only means that he doesn’t have the faith. So, it’s useless to own one,” he explained.

During Holy Week, a true holder prefers to spend moments of prayers in his chosen sacred spots in Banahaw, according to Basilio. “While praying, one can place the amulet on a running springwater for several hours to wash away the bad luck that happened in the past year,” he said.

While there are other amulet carvers in the village, Basilio is the most popular. Some holders even came to his house to express gratitude for a “job well done” while others brought new clients with them or ordered new designs.

Still others wiped their dignum amulets with a clean white cloth dipped in sacred oil.

Asked if there is an amulet that can stop bullets or deflect harm, Basilio just smiled and said: “It depends on the amulet holder.”