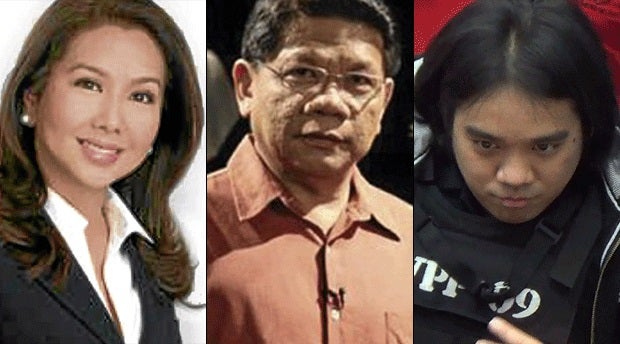 Seventh of a series

The names of these radio and television personalities appeared in the disbursements files of Luy, including the amount they were supposed to have received from 2004 to 2008.

Also entered in Luy’s files were allocations for journalists who were not identified in the records but were received on their behalf by someone else. For instance, an allocation of P150,000 was supposedly received by Mon Arroyo, a former television director allegedly intended for a journalist who was not named in the Luy ledger.

Arroyo is also the person named in Luy’s disbursement records as the one who received a P50,000 “birthday gift” each for television and radio personalities Korina Sanchez and Mike Enriquez.

Radio announcers Deo Macalma and Rey Pacheco also allegedly received at least a total of P715,000 from Napoles drawn from the deposit accounts of the Napoles NGOs from 2004 to 2008.

“My initial reaction is that the entry is so wildly false. But I may e-mail you a more substantial answer when I see the entry,” said Enriquez when contacted by phone.

Sanchez, the wife of Interior Secretary Mar Roxas, said she only met Napoles last year when she was assigned to interview her after the news about the P10-billion pork barrel scam broke. She said she knew Arroyo only as the ex-husband of a high school classmate.

In earlier interviews, Luy and other whistle-blowers like Marina Sula and Merlina Suñas denied knowing Arroyo.

“We do not know him. We were just employees and our job was for the NGOs, those type of transactions were always with Madame Napoles,” they said.

Arroyo on Saturday sent the Inquirer a sworn statement in which he vehemently denied being involved in any media payoffs by Napoles, either for himself, Sanchez, Enriquez or any journalist.

“I am writing this affidavit after I learned that a story is being written by one Nancy Carvajal implicating my name to an alleged solicitation of funds from Ms Janet Lim-Napoles allegedly to buy gifts for media people,” said Arroyo in a one-page affidavit he executed on Saturday.

Arroyo contested an entry in Benhur Luy’s files that P50,000 was given “to me to buy a birthday gift for broadcast journalist Ms Korina Sanchez.”

Arroyo said he had “not personally seen nor spoken” to Sanchez for the past 10 years.

“I only know her as a high school classmate of my ex-wife, Mylene Pura, from whom I have been separated since 2003,” he said.

“I vehemently deny the allegations and I am willing to testify and face Mr. Benhur Luy about the reported ledger entry that I allegedly received money from anyone in the Napoles group,” he said.

Sanchez’s manager, Girlie Rodis, commented Saturday on Arroyo’s statement: “It is beyond us to know what Mr. Arroyo did or did not do. We only have his denial. What factually transpired and as to where this mysterious gift went or if it even existed is clearly a matter that is to be settled between Mr. Arroyo and Mr. Benhur Luy. Ms Sanchez had and has nothing to do with either of them.”

The Inquirer exerted every effort, but failed, to get the statements of Macalma and Pacheco, leaving contact numbers with their known offices and associates.

Sotto was not a sitting senator at the time, having lost the 2007 senatorial election. He returned to the Senate in 2010.

In still other entries, Arroyo was supposed to have received at least P321,686 in allocations for the media.

The payout was described in the files as retainer’s fees, such as for a “meeting with Eric of Abante Tonight,” and “representation expense for Luchi Cruz of Probe team charge from COA reports on NGOs” (sic).

Another prominent TV and radio host collected more than P2 million from officials of the National Agribusiness Corp. (Nabcor), the state-owned agency that was used as a vehicle in the scam to divert congressional pork barrel funds to the ghost projects of the bogus Napoles NGOs and subsequently to the pockets of Napoles and her lawmaker accomplices.

The Inquirer is not naming him as two former Nabcor officials, who have applied to become state witnesses, have yet to provide documentary evidence.

The TV personality hosts an early morning show and cohosts a late afternoon radio public affairs program, both of which air on weekdays.

Former Nabcor officials Rhodora Mendoza and Vic Cacal have claimed that this prominent TV and radio personality received P2 million from Nabcor president Alan Javellana on the instruction of then Agriculture Secretary Arthur Yap “as pay-off to stop criticisms of a Nabcor project.”

“Nabcor shoulders the under-the-table expenses of DA (Department of Agriculture) on the instructions of Secretary Yap,” Cacal said.

Mendoza and Cacal have provided documents to the Office of the Ombudsman purporting to show that Senators Juan Ponce Enrile, Jinggoy Estrada, Ramon Revilla Jr. and Edgardo Angara and 79 House members coursed a total of P1.7 billion in pork barrel, or the priority development assistance fund (PDAF), allocations through Nabcor, which then channeled the money to dubious nongovernment organizations (NGOs), during the period 2007 to 2009.

The lawmakers have all denied the charges.

Mendoza, Cacal and Javellana are among the 38 people under investigation in connection with the P10-billion pork barrel scam. Mendoza and Cacal have applied to become state witnesses.

The Inquirer earlier reported that Erwin Tulfo, a TV-5 news anchor, and Carmelo del Prado Magdurulang, a talk show host at dzBB, were allegedly among the beneficiaries of the pork fund diversion through Nabcor, based on checks and accompanying documents made available to the Inquirer.

Mendoza and Cacal said that a check for P245,535 was issued to Tulfo on March 10, 2009, drawn from a Nabcor account at United Coconut Planters’ Bank (UCPB), Tektite Branch PSE Center, Ortigas, Pasig City.

The checks were described in the accompanying vouchers as “advertising expenses,” according to documents submitted to the Office of the Ombudsman and made available to the Inquirer.

Tulfo has denied any wrongdoing and has filed a libel suit against the Inquirer.

Luy’s files were copied by the Inquirer from a hard disk given by the parents of Luy and his former lawyer Levito Baligod when they  visited the newspaper  on April 27, 2013.

Luy, who acted as Napoles’ finance officer, kept records of transactions on orders of Napoles from 2002 to 2012.
RELATED STORIES