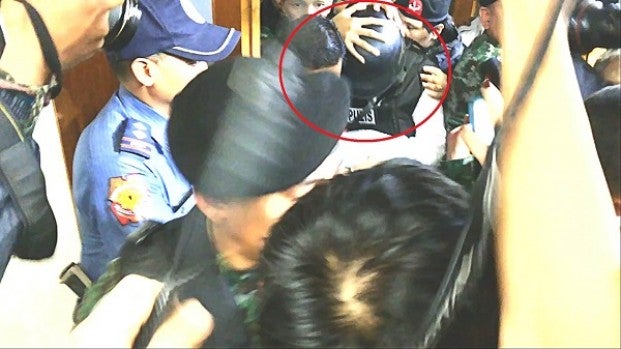 Wearing a Kevlar helmet and police bulletproof vest, Janet Lim-Napoles, in red circle, is being led out of the courtroom in Makati after her arraignment in mid-September last year by security escorts. Relatedly, Napoles’s name earlier floated in the infamous Kevlar case, which involved irregularities attending the Philippine Marines’ purchase of P3.8 million worth of Kevlar helmets in 1998. Here, Napoles and nine high-ranking military officials and several other people were charged with graft and malversation in the Sandiganbayan antigraft court in 2001.INQUIRER.net’s Julliane Love de Jesus

Sixth of a series

The scheme that alleged pork barrel scam mastermind Janet Lim-Napoles used to defraud the military in the infamous Kevlar case in 1998 was the same method she employed to allegedly make off with billions of pesos in congressional pork barrel funds using bogus nongovernment organizations as fronts and with the connivance of some lawmakers, according to documents in the accounting files of whistle-blower Benhur Luy.

The Kevlar case involved irregularities attending the Philippine Marines’ purchase of P3.8 million worth of Kevlar helmets in 1998 for which Napoles and nine high-ranking military officials and several other people were charged with graft and malversation in the Sandiganbayan antigraft court in 2001.

Napoles was accused of making fraudulent deliveries of Kevlar helmets to the Marines. Instead of helmets manufactured in the United States, she allegedly delivered inferior ones made in Taiwan.

The Luy files showed that, as in the pork barrel case now roiling the country, Napoles had used fake, ghost or overpriced deliveries and payoffs to key military officers in the Kevlar case.

The files also showed that Napoles continued to give cash allowances to her coaccused in the Kevlar court case from 2004 to 2008.

Napoles’ coaccused in the Kevlar case and other military officers received at least P14 million over that four-year period, according to Luy’s files. The cash came from the pork barrel transactions of Napoles’ bogus nongovernment organizations.

The payoffs to Napoles’ coaccused in the Kevlar case continued to be made until some of them, including Napoles, were acquitted by Sandiganbayan in 2010 in a decision written by Associate Justice Jose R. Hernandez and concurred in by Associate Justices Gregory Ong and Maria Cristina Cornejo.

According to the financial records, Napoles’ coaccused in the Kevlar case who continued to receive cash from her were retired Lt. Gen Edgardo Espinosa, former commandant of the Navy Marine Corps; Col. Natalio Torreno, Capt. Edmund Yurong and Col. Luciardo Obena.

An entry in Luy’s records indicated “Kevlar payroll” amounting to P500,000, but did not identify the recipient or recipients.

Luy’s records showed that Espinosa received at least P300,000 in 2004 in cash and checks from Napoles.

Torreno was shown to have received at least P1.6 million in cash and checks in various months.

Retired Vice Admiral Eduardo Santos, now president of Maritime Academy of Asia and the Pacific, received at least P9.5 million in cash and in checks from Napoles, according to Luy’s financial transaction records.

The records indicated the cash was for “RFL-gun accessories” and “Adm. Santos-Ombudsman,” and a Metrobank check for P2.5 million was classified as a “loan.”

Two entries for P250,000 cash were described in the records of Luy as “charge for the Marine case” for Santos.

Yurong, the records indicated, received at least P243,000 in cash and checks representing his allowance for the Kevlar case.

Also mentioned in Luy’s records was P600,000 given to a certain “Gen. Hanar, Quezon Department of Interior and Local Government-SOP” on May 31, 2010.

The Inquirer obtained copies of Luy’s files on April 27, 2013, when his family with their former lawyer Levito Baligod visited the Inquirer for help in exposing Napoles and her highly placed clients.

Luy, who served as Napoles’ finance officer, made records of all transactions on the instructions of Napoles, his employer and cousin. With reports from Kat de Villa, Marielle Medina, Karl Ocampo and Kate Pedroso, Inquirer Research