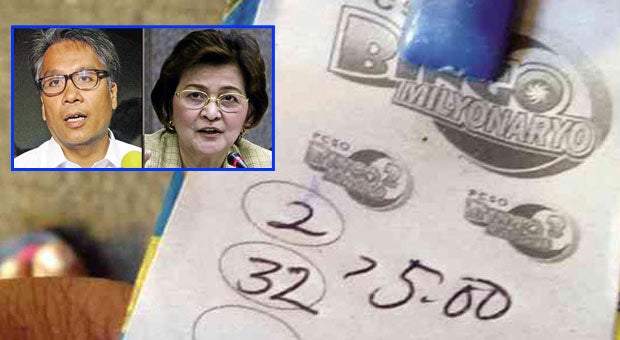 The rapid growth of BM operations in less than a year of an experimental run, with BM operators now nearly double those of the Small Town Lottery (STL), shows the grand plan of resigned PCSO chair Margarita Juico for the lottery game.

Juico’s apparent plan was to replace the 19 STL franchise dealers in the country (awarded between 2006 and 2010 with combined annual sales of P3 billion) with BM, until she hit a wall in the form of a Liberal Party (LP) blockade led by Interior Secretary Manuel Roxas II who believed that BM was nothing more than a front for gambling “lords” running jueteng and masiao illegal numbers games.

The President had asked Roxas to look into BM operations as he apparently shared his disapproval of it.

The speculations about Juico’s sudden resignation from the PCSO last week ranged from an alleged LP plot to take over the cash-rich PCSO in preparation for the 2016 presidential elections to supposed conflicts with Roxas over the BM issue to the President’s alleged dissatisfaction with her over the same issue.

In a text message on Friday, PCSO general manager Jose Ferdinand Rojas claimed that the agency was in the process of evaluating and reviewing BM’s implementing rules and regulations (IRR) and the retailers, “including the flow process.”

“This will help correct any flaw, if any, and also help us in determining a better IRR for new games being lined up by [the] PCSO,” he said.

According to BM implementing rules and regulations obtained by the Inquirer, Comnet was in charge of the game’s finances based on one of the provisions, which stated: “The prize fund shall be held by Comnet and used exclusively to pay winning tickets. Any balance of the prize fund at the end of the contract or upon its termination or cancellation shall be remitted to the  PCSO.”

Based on records furnished by the House committee on games and amusement chair and Cavite Rep. Elpidio Barzaga, the PCSO granted four BM operators with multiple territorial franchises—Surebet Ventures in Metro Manila, Pampanga, Bicol, Cebu and Cagayan de Oro; First Gamer Link in Tarlac and the first and second districts of Bulacan; Microgamer Inc. in Pangasinan and La Union; and Hamagold Entertainment Corp. in Aklan and Antique.

Interestingly, a number of these dealers were found to be operating out of the same head office, indicating that they were owned by a single group or individual—XYZ Ventures, First Batong Buhay, Moon Valley, Great Platinum and Mega Panalo at LGTM 10th floor Antel Building in Ortigas.

The PCSO did not identify the operators of three BM franchises—Ilocos Sur, Isabela, and those of the third and fourth districts of Bulacan.

Aside from Roxas, another LP leader, Nueva Vizcaya Rep. Carlos M. Padilla, a deputy House speaker, has also sought a congressional probe into BM’s links with gambling kingpins in his province.

Padilla furnished the Inquirer with the National Bureau of Investigation’s findings on Moon Valley, Comnet’s franchisee in Nueva Vizcaya, which the NBI claimed was owned by “one Gen. Edgardo Divina of Cuyapo, Nueva Ecija.”

The NBI’s April 2014 report said: “Surveillance operations and intelligence gathering conducted in these five towns of this province (Bayombong, Dupax del Norte, Villaverde, Quezon and Diadi) revealed that the company was only a front for jueteng operations as they used paraphernalia and mechanics similar to the said numbers game and deviated from guidelines set by the PCSO. Instead of bettors placing bets in the PCSO outlets, betting for BM uses collectors or kubrador, and head collectors, or cabo, who roam around the locality to collect bets. The chances of winning are determined through winning combinations, such as tumbok, diretsa, combo and the kubrador and cabo will personally broadcast the winning pairs, or labas, to their bettors.”

Instead of machine-generated receipts or tickets, the NBI said bettors were issued papelitos, or small sheets of paper to record their bets.

Another LP member, Laguna Rep. Dan Fernandez, is seeking the suspension of BM, saying it was cannibalizing the market of STL. According to Fernandez, STL was already providing enough income to the PCSO and the local governments that promoting another numbers game for this purpose was unnecessary.

Padilla said the police and local governments were helpless in stopping BM because the PCSO has declared that its charter has granted BM operators, retailers and agents exemptions from securing barangay clearances and mayors’ permits.

Pagcor urged to give game to PCSO