Pork raps vs 3 senators in 2 weeks 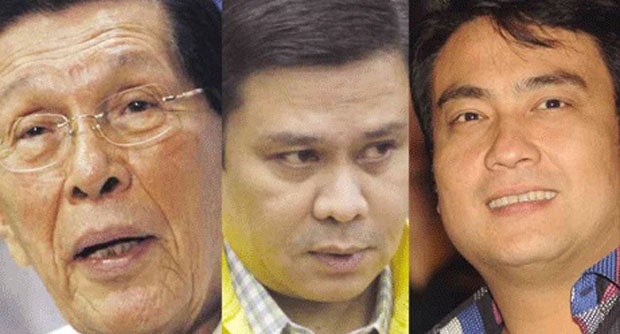 The Ombudsman is set to file plunder and graft charges against three senators over the pork barrel scam once its head, Conchita Carpio-Morales, returns to the country, Inquirer Radio 990 AM reported on Saturday.

The report said Morales was abroad for a conference.

A separate television report said Morales left for the United States on Saturday to attend a two-week conference on corruption.

The Inquirer Radio report quoted Morales as saying the charges would need to be signed by her before they could be filed in the Sandiganbayan.

The Office of the Ombudsman has recommended plunder and graft charges against Senators Ramon Revilla Jr., Jinggoy Estrada and Juan Ponce Enrile, and several other officials over the pork barrel scam, an elaborate scheme to allegedly divert the Priority Development Assistance Fund (PDAF) or pork barrel of legislators to ghost projects for kickbacks.

The funds were allegedly coursed through the bogus nongovernment organizations of Janet Lim-Napoles, the accused mastermind of the scam.

Meanwhile, a Catholic Bishops Conference of the Philippines (CBCP) official challenged government officials accused of benefiting from the multibillion-peso pork barrel scam to admit their fault and apologize to the people.

“Why not admit it if indeed they benefited from it? Then say sorry,” said Manila Auxiliary Bishop Broderick Pabillo, chair of the CBCP public affairs committee, in an interview with reporters.

Pabillo cited the case of government leaders in other countries who quickly admit to wrongdoings and face the consequences of their actions.

“I wish our lawmakers were like that,” he said. “But the thing is, nobody is coming out to say sorry. You mean to tell me that all those people in the (Napoles) list are all clean?” Pabillo said.

The list contains the names of a number of incumbent and former senators and congressmen as well as Cabinet members and other public officials who allegedly had dealings with Napoles.

“These officials should admit their wrongdoing and not let the nation suffer. Are we not capable of admitting our mistakes?” Pabillo said.

“Nothing is wrong with saying sorry. Say sorry and then take responsibility for your actions,” he added.

The Department of Justice, meanwhile, has yet to decide on Napoles’ offer to turn state witness pending completion of her affidavit, deputy presidential spokesperson Abigail Valte said in a radio program yesterday.

“At this point, it’s not clear yet. As we speak, her affidavit is not yet complete and has not been submitted. So at this point, we really don’t know,” Valte said over state-run dzRB radio.

Different lists of alleged scam players, including senators, representatives and Cabinet members, have been leaked to the media over the past two weeks.

The contents of Napoles’ signed list was revealed by the Senate blue ribbon committee last Thursday after it received a copy from Justice Secretary Leila de Lima, but this has failed to stop speculations as to who really took part in the scam. Inquirer Radio 990 AM; Tina G. Santos and TJ Burgonio