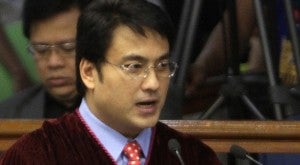 MANILA, Philippines – Senator Ramon “Bong” Revilla Jr. on Monday filed a motion for reconsideration before the Office of the Ombudsman over his supposed role in the pork barrel scam, Inquirer Radio 990AM reported.

Revilla joined the other co-accused Ruby Tuason and Jessica Lucile “Gigi” Reyes who have also filed the plea for the anti-corruption agency to drop the charges against them.

Revilla and Reyes through their lawyers claimed their constitutional rights were violated when they were charged even though they were not given copies of the witnesses’ affidavits, according to the radio report.

Meanwhile, Tuason’s lawyer Dennis Manalo raised her client’s immunity from the case due to her testimony before the Senate as provisional state witness. Tuason has testified that she personally delivered kickbacks to Senator Jose “Jinggoy” Estrada, who was also among the accused.

Tuason and Reyes were among those held liable by the Ombudsman for their role in the scam allegedly masterminded by Janet Lim-Napoles. Also held liable for plunder and graft charges were senators Enrile, Estrada and Revilla.

Tuason, the former social secretary of deposed president Joseph Estrada, testified before the Senate as provisional state witness against Sen. Estrada and Enrile. Reyes, the resigned chief of staff of Enrile, was accused of being the middle person between Enrile and Napoles.

The pork barrel scam is an elaborate scheme of siphoning lawmakers’ Priority Development Assistance Funds to dummy NGOs for non-existent projects. These funds were allegedly converted to kickbacks among the senators, their personnel and Napoles.

Napoles is currently detained at Fort Santo Domingo in Laguna for the non-bailable illegal detention case.

The 53 accused in pork barrel scam: Where are they now? Who’s in, out of PH