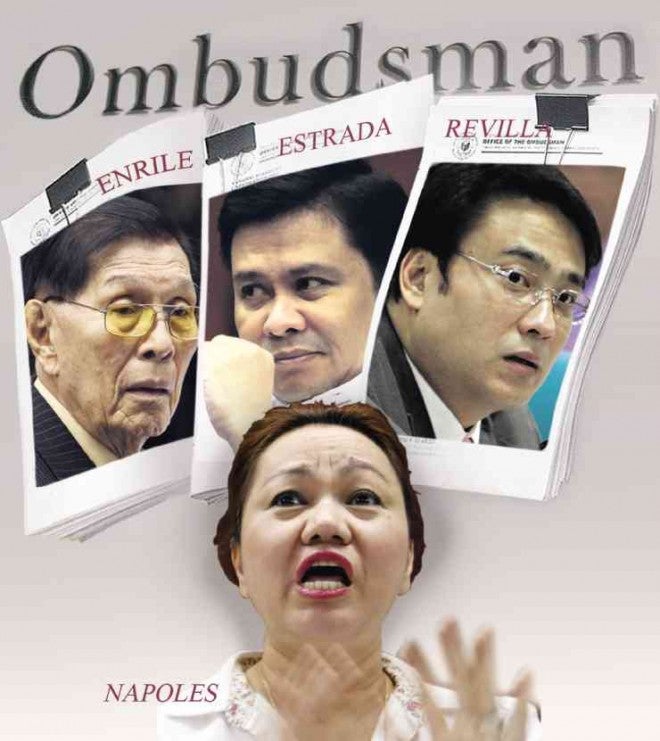 Eight months after the alleged P10-billion pork barrel scam broke out, sparking outrage that led to a Million People March and a Supreme Court ruling declaring that the practice was unconstitutional, the Office of the Ombudsman (OMB) came out with its ruling.

The ruling marks the first time senators are indicted for plunder.

“The people in the controversy are among the powerful who think they could still bank on the public forgetting the issue once it’s in the courts, but that’s not the case anymore,” according to Peachy Bretana, one of the organizers of a massive march against the pork barrel last year.

‘They can’t do it again’

“It’s the only way they would know that they can’t do that to us again, we won’t just be sitting pretty. Those days are over,” Bretana said in a phone interview.

Plunder is punishable by reclusion perpetua or life, and forfeiture of the ill-gotten wealth in favor of the government. It is a nonbailable offense.

Ombudsman Conchita Carpio Morales approved the recommendations of the panel, which found probable cause in three joint resolutions to indict them for violations of Republic Act No. 7080 (plunder) and Section 3 (e) of Republic Act No. 3019, otherwise known as the Anti-Graft and Corrupt Practices Act.

The OMB said the respondents have five days to appeal the decision. It said the resolutions on the cases were sent to the respondents on Tuesday and that cases will be filed in the Sandiganbayan once a ruling is handed down on their motion for reconsideration, if they file one.

“The wheels of justice are moving forward,” said Communications Secretary Herminio Coloma. “We share our people’s fervent hopes on the final resolution of these cases.”

The 144-page resolution on the cases involving Enrile also held liable his resigned chief of staff Jessica Lucila “Gigi” Reyes, Ruby Tuason, Napoles, her nephew Ronald John Lim and her driver John Raymond de Asis for plunder, in addition to 15 counts of graft along with several other respondents. 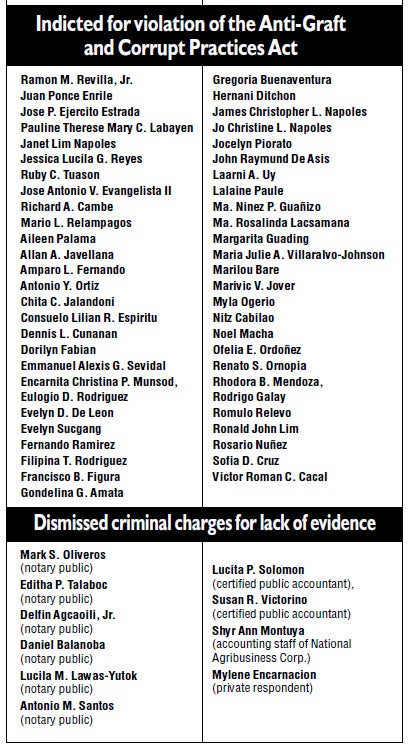 The 140-page resolution on the cases involving Revilla found his aide Richard Cambe, Napoles, Ronald John Lim and De Asis liable for plunder plus several others equally liable for 16 counts of graft.

The 120-page resolution on the cases involving Estrada found probable cause to also indict his aide Pauline Labayen, Napoles, Tuason and De Asis for plunder, and several others for 11 counts of graft.

On the charges for plunder, the OMB concluded that the three senators took undue advantage of their position to illegally divert their PDAF allocations to the Napoles nongovernment organizations (NGOs), in exchange for kickbacks amounting to more than P172 million for Enrile, P242 million for Revilla and P183 million for Estrada “under a modus operandi of a combination and series of overt criminal acts repeatedly taking place over a number of years.”

It said the supposed PDAF-funded projects turned out to be “ghost” projects.

The cases stemmed from several complaints filed by the National Bureau of Investigation through lawyer Levito Baligod on Sept. 16, 2013, and by the OMB Field Investigation on Nov. 18, 2013, based on the exposé of whistle-blower Benhur Luy that the Inquirer published in a series of articles in July last year. Luy gave evidence of huge amounts of the PDAF allocations going to alleged “dummy” NGOs in a scheme supposedly hatched by Napoles.

The OMB panel cited the sworn statements of Luy and former Napoles employees Marina Sula and Merlina Suñas, the 2007-2009 Commission on Audit special review of PDAF disbursements, and sworn statements of local government officials and the purported beneficiaries.

The panel said pieces of evidence either remained uncontroverted by mere denials or dovetailed with the affidavits of some respondents.

The resolutions accused the respondents of receiving kickbacks or portions of the diverted amount, and of being manifestly partial in the selection of the Napoles NGOs and the conduit implementing agencies (IAs). Such a scheme, the OMB said, resulted in unwarranted benefit to the Napoles NGOs which were chosen without public bidding.

The OMB explained that the number of counts (showing commonality of criminal design per set of conspirators) was determined from the common paper trail arising from either each special allotment release order (Saro) or every IA/NGO tandem, if one Saro was split and coursed through different IAs and NGOs, regardless of the number of projects. It said each of the senators repeatedly received sums of money from Napoles for endorsing her NGOs to implement the PDAF projects.

The OMB also gave a picture of how the scam was supposedly perpetrated: The senator or his authorized representative would agree to transact his PDAF with Napoles who, in the case of Enrile and Estrada, acted through Tuason. Once a PDAF allocation become available to the senator, his staff would inform Napoles or her staff directly (or indirectly through Tuason).

Napoles or Luy would then prepare a listing of the available projects and the corresponding indication of the specific implementing agencies.

According to the OMB, this “listing” came with a letter from the legislator adopting the program, a list of implementing agencies, and the amount of PDAF to guide the Department of Budget and Management (DBM) in the preparation and release of the corresponding Saro.

“Significantly, money was paid and delivered to the senator even before the Saro and/or NCA (notice of cash allocation) is released. Napoles would advance the down payment from her own pockets upon the mere release by the Senator’s office of the listing of projects to the DBM, with the remainder of the amount payable after the Saro is released by the DBM and a copy of the Saro forwarded to Napoles,” the OMB said.

After the DBM issued the Saro, the Senator, through his staff, would then write another letter addressed to the implementing agencies. Upon receipt of the Saro, Napoles would direct her staff including witnesses Luy, Sula and Suñas to prepare the PDAF documents, including project proposals by the NGO and endorsement letters, for the signature of the legislator and/or his staff, which reflected the preferred NGO to implement the undertaking.

Along with the earlier PDAF documents, the endorsement letter of the senator was transmitted to the IA which, in turn, directed the preferred Napoles NGO to execute the project.

OMB spokesperson Rawny Lopez said the resolutions covering members of the House of Representatives, who were also accused of receiving kickbacks from their PDAF, would be released separately.

Assistant Ombudsman Asryman Rafanan was asked about the case involving Tuason, who had admitted she received commissions from the illegal transactions, offered to return the money and had applied to become a state witness. “Her liability in the crime had to be resolved first before a decision of her application as state witness,” Rafanan explained.—With reports from Leila B. Salaverria, Christian V. Esguerra and Nancy C. Carvajal