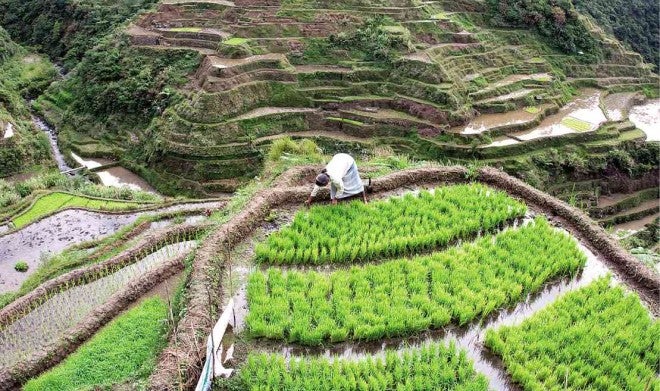 DAGUPAN CITY—Ever heard of “chong-ak,” “imbuucan” and “ominio?” These are rice varieties grown in the Cordillera that are fast disappearing, according to organic food advocates.

These are the only Philippine products included in the Ark of Taste, an international list of endangered heritage food that has recorded to date some 1,600 such items from different countries.

The list is maintained by Slow Food Foundation for Biodiversity, a nonprofit organization that coordinates projects in support of small-scale food producers around the world.

Victoria Padilla, president of the Association of Advocates and Practitioners in Pangasinan on Organic Agriculture, said biodiversity loss had been a major issue in the “slow food” movement because of the food choices that people made.

“Each one of us, we can vote three times a day to choose our food. And it can really change the world if we make the right choice,” Padilla said.

“[For] example, instead of always eating French fries, why not look for the resources that we used to have and promote and conserve these so that these will not disappear,” she said.

According to the Ark of Taste website, chong-ak, which is a Kalinga word, is a “plump, rust red, seed-coated” rice variety. It is planted from December through February in irrigated terraces and harvested from the middle of June through August.

“Chong-ak would be served during weddings and family reunions, especially during the Pusipus celebration, or the gathering of relatives before a sick or elderly family member dies. Bundles of chong-ak palay (unthreshed rice on its panicle sheath) are displayed at the feet of the dead to symbolize his or her wealth in rice fields and harvest,” the website said.

Imbuucan rice, also known as “imbu-an” or “tinglu,” is grown on the rice terraces in the towns of Banaue and Hingyon in Ifugao province.

During its ripening stage, the website said, the terrace area planted with imbuucan has a reddish cast because of the peculiar red stripe of its grain.

The ominio rice, on the other hand, is a medium-sized, glutinous grain variety grown in the town of Barlig in Mountain Province.

“Because of its deep purple or black color, the rice is the preferred glutinous variety of the indigenous peoples in the areas where it is grown. It is used for rice desserts and for making rice wine,” the website said.

The three rice varieties are now rarely sold in the commercial market.

Padilla said that in February, she had nominated four more endangered food products for inclusion in the Ark of Taste.

These are the “alamid” coffee from the droppings of the Philippine palm civet that feeds on coffee beans; “sinarapan” (Mistichthys luzonensis), a small fish found only in Lakes Bato and Buhi in Camarines Sur province; “kabog,” a small-seeded cereal plant known as millet in other countries; and “budbod kabog,” a black native cake made from kabog.

“These [types of] food are beginning to disappear, either because of exploitation or simply because people ignore them,” Padilla said.

“These are among the [types of] food that the next generation will probably not be able to taste.”

She said that by nominating them to the Ark of Taste, people would be aware and would help in conserving and protecting these.