The 53 accused in pork barrel scam: Where are they now? Who’s in, out of PH 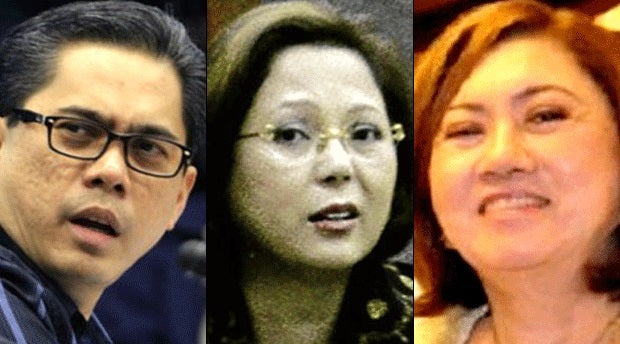 Six of the 53 people, including three senators, in the first set of respondents recommended for prosecution in connection with the pork barrel scam have fled the country, the Inquirer has learned.

Authorities began ascertaining the whereabouts of these people after the Ombudsman found probable cause to indict them for plunder or graft, said a knowledgeable source, who asked not to be identified for lack of authority to speak on the matter.

The source said that contrary to earlier reports, Pauline Therese Mary C. Labayen, Sen. Jinggoy Estrada’s deputy chief of staff, has not left the country for the United States.

“There are no official records of Labayen’s departure and a check with US immigration records showed that there was no record of her arrival,” the source said.

“We have yet to receive the complete report of his departure and destination, but the initial information is that he left with his wife and children,” the source said.

However, this was contradicted by another source, who said Cunanan was still in the country.

According to the official records, Estrada left the country with his wife, Precy, on March 26 bound for Hong Kong and is now reported to be in Los Angeles.

Sen. Ramon Revilla Jr. and his wife, Cavite Rep. Lani Mercado, with their children left very early last March 30 to go on a pilgrimage to the Holy Land.

Jessica Lucila “Gigi” Reyes, former chief of staff of Sen. Juan Ponce Enrile, was reported to have left for Macau on Aug. 31, 2013, and is now believed to be in the United Kingdom or Morocco.

Estrada, Revilla and Enrile are the only senators so far to have been included in the Ombudsman’s respondents list.

Ruby C. Tuason, former social secretary of deposed President and now Manila Mayor Joseph Estrada, the senator’s father, left on March 2 for San Francisco, California. Tuason, a provisional state witness, has executed affidavits and testified at the Senate hearing on the scam that she had personally delivered kickbacks to Estrada in the latter’s Senate office.

Antonio Y. Ortiz, the TRC director general alleged to have also benefited from the scam, left the country on Sept. 11, 2013, five days before the National Bureau of Investigation filed the plunder complaints in the Office of the Ombudsman.

Still in the country

The following respondents are still in the country or at least are not confirmed to have left the country:

Janet Lim-Napoles, the owner of JLN Group of Companies, which is at the center of the scam, and the alleged mastermind of the wholesale conversion of the congressional pork barrel into kickbacks for certain legislators, is under hospital arrest at Ospital ng Makati and is scheduled to undergo surgery.

Reynald “Jojo” Lim, Napoles’ brother with a P5-million bounty on his head on illegal detention charges, remains at large but is believed to be in the country.

Richard A. Cambe, Revilla’s chief political adviser, has stopped reporting for work at the Senate. There is no record of his departure.

Gondelina G. Amata, president of the National Livelihood Development Corp. (NLDC), one of the government implementing agencies implicated in the scam, appeared to be in the country as there’s no record of her departure.

The source also said there were no records of departure of these Napoles employees who have been named in the Ombudsman’s resolution:

John Raymund de Asis, a former Napoles driver and president of Kaupdanan para sa Mangunguma Foundation Inc., was recently seen at the Office of the Ombudsman submitting his counteraffidavit.

Evelyn de Leon, president of Philippine Social Development Foundation Inc. and a trusted bagman of Napoles who had earlier been convicted in the Kevlar helmet scam but is now on parole.

Fernando Ramirez, a security officer and driver of Napoles who, according to the whistle-blowers, personally delivered money to Estrada, Revilla and Reyes.

Laarni A. Uy, a cousin of Napoles and incorporator of APMFI.

The following respondents who work in government agencies implicated in the scam also have not left the country, the source said.

However, the treaty with the United Kingdom has yet to be ratified by the Senate.