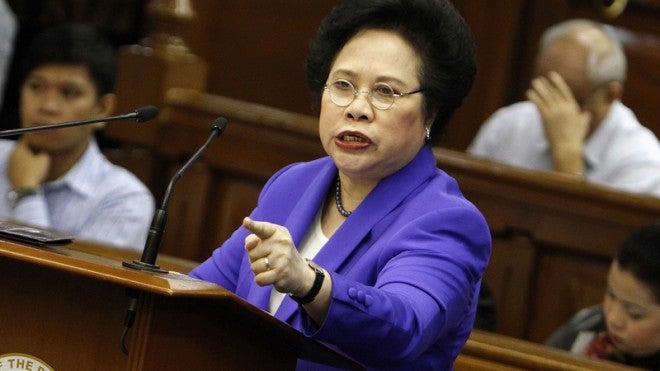 MANILA, Philippines – Calling her the fall guy of Senator Juan Ponce Enrile, Jessica Lucila “Gigi” Reyes, the once powerful chief of staff of the minority leader, was urged by Senator Miriam Defensor-Santiago to take revenge against her boss by turning a witness.

During Thursday’s Senate hearing into the pork barrel, Santiago was at it again, turning the grilling session of Dennis Cunanan into a bashing frenzy of her nemesis.

She said that her suspicion that Enrile was  trying to  make  his former chief  of  staff a “standalone culprit” in the  P10-billion “pork barrel”  scam has been reinforced by the admission of  the Senate minority leader’s wife that Enrile had an alleged affair with  Reyes.

“In other words, this couple, the Enriles, are trying to make  Gigi Reyes a standalone culprit for all the  kickbacks that he received under the pork barrel schedules,”  Santiago said while  interpellating Dennis Cunanan, director general  on leave  of the Technology Resource Center.

“The effect of this news on me as a bystander is apparently the Enrile camp is engaged in a lurid scheme that is masterminded by a person I can only call a sexually dysfunctional old man, a pedophile, kasi ang hilig nya si Gigi Reyes is not his age e…to take the criminal blame not only for his plunder, but also for his moral turpitude in the sense of sexual addiction openly displayed as a public official,” she said.

Santiago said how the public could trust a person like Enrile, who she said, had openly displayed his sexual addiction with the wife’s admission that he had 38 mistresses, including Reyes.

Santiago then urged Reyes, who fled the country after a case was filed against her in connection with the scam, to return to the country and turn against Enrile.

“I think the best revenge for Gigi Reyes since I know she will watch this on YouTube, is Atty. Gigi, return the money that Enrile stole…and turn the tables on Enrile by coming home and turning state  witness,” she further said.

What Went Before: Enrile denies Gigi Reyes was ‘other woman

In The Know: Rumors linking Enrile to Gigi Reyes started in 1998 …