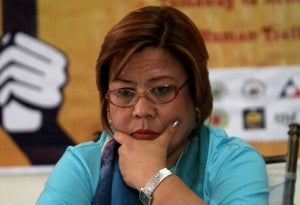 MANILA, Philippines—Justice Secretary Leila De Lima will ask the Senate to give her more time to submit the list and affidavit given to her by alleged pork barrel scam mastermind Janet Lim-Napoles.

The Justice Chief told reporters that what she has now is a signed and duly executed initial affidavit which covers the three senators and five lawmakers already charged. Also mentioned in the initial affidavit are those charged in the Malampaya fund scam.

“But that is only the initial affidavit. We are still waiting for the completed extended affidavit, which expectedly covers the list. This list will have more names than those already charged before the Office of the Ombudsman [in the] first and second batches,” De Lima told reporters.

She said Napoles’ lawyers are working double time to be able to give to her the completed list but she said she does not think it can be finished before the Senate’s deadline, which is Thursday.

“I think the committee would understand we need additional time, little time, just few more days probably one week to submit,” De Lima said and then she will ask the Senate to be careful in releasing the list to the public.