Because of the absence of Napoles’ surgery doctor Dr. Elsie Pascua, ‎the court ruling, which was supposed to be released on Wednesday, will be delayed for until Thursday.

Earlier on May 5, Napoles asked the Makati RTC Branch 150 to allow her to stay at the government-run Ospital ng Makati until her post-operation check-ups are completed.

Lawyer Bruce Rivera, Napoles’ counsel, said Pascua is in “the best position” to speak on the matter.

Napoles underwent hysterectomy at the hospital to remove her uterus and two ovaries last April 22 after being diagnosed to have a condition called severe adenomyosis of the uterus with mult‎iple adenomyomata. 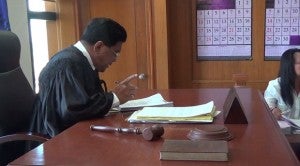 For failing to bring doctors in the court, Makati Judge Elmo Alameda said he had the option to reject Napoles’ motion but the defense sought for “more time.”

Rivera said they “opted not to bring” the doctors because the medical certificate from the hospital would suffice.

But the Makati judge maintained that Napoles’ stay in the hospital was already overdue.

The OsMak earlier said the recovery of the detained businesswoman would take 26 days since the day of her operation.

Napoles has only five more days to stay in the hospital.

Visibly irked by the delays of the case, Alameda said “the public is very much interested with this case. (They were) all eyes (on this),” he said.

The defense pointed out that it would cost the government less if they allow Napoles to stay in the hospital while her follow-up treatments are being conducted.

“We are asking for compassion. We just want more time,” Rivera said.

But Alameda countered the defense and maintained that the government could send doctors to jail rather than going to OsMak.

Speaking to reporters after the hearing, Rivera said it would be more economical if Napoles would stay at OsMak.

“We already know it is more expensive for the government to spend P120,000 just to transport her every week,”  he said.

The Philippine National Police (PNP) earlier revealed that the government spends more than P100,000 for every movement of Napoles.

“If she would be allowed to stay at OsMak, then it would be cheaper by a mile,” he added.