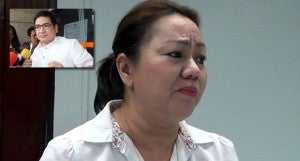 MANILA, Philippines—Some names on the list of lawmakers and government officials linked to the pork barrel scam that came out in the media are not on the original list which businesswoman Janet Lim Napoles submitted to Justice Secretary Leila de Lima recently, Bruce Rivera, Napoles’ lawyer, said on Wednesday.

“We feel embarrassed for the people being linked (to the pork barrel scam) who are not on the list we submitted to Secretary de Lima,” Rivera told reporters immediately after a court hearing on Wednesday.

Rivera, however, refused to name names saying doing such would unnecessarily implicate people in the scam.

“We don’t want to try people by publicity. If ever we would come out with the list, we wanted it to be substantiated with evidence. We are responsible individuals,” Rivera said.

Napoles, allegedly one of the key operators in the pork barrel scam, has been staying at the Ospital ng Makati after she underwent hysterectomy, a procedure that removed entirely her uterus and ovaries on April 23. She has been in detention for the serious illegal detention charge filed by Benhur Luy — her former finance officer who has turned whistle-blower on the pork barrel scam – against her and her brother Reynald Lim.

The night before she was scheduled to go under the knife, she met De Lima at her hospital room where she executed her affidavit and spilled the beans on the pork barrel scam.

Rivera told reporters that he has not been regularly reading the newspapers  “because of the misinformation in there,” but when he did, he was surprised to see the names of people not in the list of Napoles.

“It means there are people who want to create suspicion on our list. But there is only one list,” Rivera said.

Rivera, however, would not say if the list he was pertaining to was that of whistle-blower Benhur Luy in the pork barrel scam, or that of former senator Panfilo Lacson.

The Philippine Daily Inquirer came out on Wednesday, with a special report on the list of lawmakers in the digital files of Luy, which detailed the transactions made by Napoles from 2002 to 2012.

Rivera said the list their camp has given to Lacson was “incomplete” and did not bear all the names that they have given to De Lima.

“We gave an incomplete copy to (former senator) Lacson, it was unsigned. It was a mere scrap of paper,” Rivera said.

“I don’t know of Benhur’s list. Why did it come out just now? He has been a witness for the longest time. Where did he find it?” Rivera said.

Napoles’ lawyer expressed confidence that De Lima would keep the list as it has been submitted to her. “I trust she would not sanitize the list,” he added.

Escudero: Napoles’ list meant to confuse, move spotlight from self