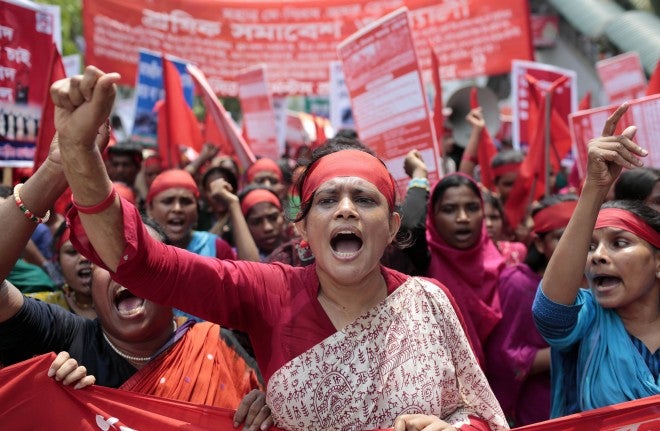 Bangladeshi garment workers and activists shout slogans demanding punishment for owners of garment factories that have had accidents in the past, compensation for victims and ensuring work place safety during a May Day rally in Dhaka, Bangladesh, Thursday, May 1, 2014. AP

PHNOM PENH, Cambodia — May Day demonstrators denounced low wages and called for better treatment of workers during rallies Thursday that turned violent in Cambodia and in Turkey, where police tried to enforce a ban on public protests.

In Phnom Pehn, civilian auxiliary police, armed with clubs and often used by the government to break up protests, turned on the demonstrators after opposition leaders spoke to the crowd of nearly 1,000. The assaults appeared to be random and limited, and were over in less than an hour.

“These security forces seem to be addicted to beating people,” he said. “Every time they disperse protesters, they beat people, and not one of them has been arrested.”

A ban on demonstrations has been in place since January, following numerous labor protests for a higher minimum wage and opposition demonstrations denouncing last July’s general election as rigged.

Cambodia is formally democratic, but Prime Minister Hun Sen’s authoritarian government has been in power for almost three decades while his opponents have complained of intimidation.

Opposition leader Sam Rainsy, speaking before the violence, condemned the government for banning workers from holding a May Day rally. He said he supports labor’s demands for a higher minimum wage for garment factory workers. Textile exports are Cambodia’s main foreign exchange earner.

Thousands of workers in Bangladesh, including many from garment factories, took to the streets demanding the execution for the owner of a building that collapsed last year, killing more than 1,100 laborers in the worst disaster the garment industry has seen.

Sohel Rana, the owner of the illegally constructed Rana Plaza, is behind bars and an investigation against him is pending on charges of violating building codes. The building included five garment factories, which were contracted by many Western brands to make clothes.

The protesters, including several trade unions, carried red flags and banners reading “We want execution of Sohel Rana,” and “No more deaths in factories.”

“He must be punished so that such incidents do not happen again,” said Najma Akter, a former garment worker who is now a leading workers’ rights activist.

Hundreds of workers in Hong Kong joined the Labor Day march, calling for improved working conditions and for the government to restrict the number of working hours — a complaint felt by many, including construction workers, bus drivers and restaurant cooks.

Lawmaker Lee Cheuk-yan said that regulation of work time was one of the oldest concerns of the International Labor Organization Convention, but Hong Kong has yet to legislate for it.

“Hong Kong is a first world, first class world economy, but our labor law is really very backward,” he said.

In Moscow, about 100,000 people marched through Red Square, the first time the annual parade has been held on the vast cobblestoned square outside the Kremlin since the fall of the Soviet Union in 1991.

In keeping with Soviet-era traditions, Thursday’s parade was organized by trade unions and honored the working man. But it also celebrated Russia’s annexation of Crimea and was seen as part of President Vladimir Putin’s efforts to stoke patriotic feelings.

Marchers held up signs saying “Let’s go to Crimea for vacation” and “Putin is right.” Russian flags fluttered through the crowd.

In the Philippines, thousands of workers marched peacefully in Manila to protest low wages and employers’ practice of replacing regular employees with temporary hires who get low pay and little or no benefits. They also decried what they said was the failure of President Benigno Aquino III to deliver on his anti-corruption and pro-poor reforms. 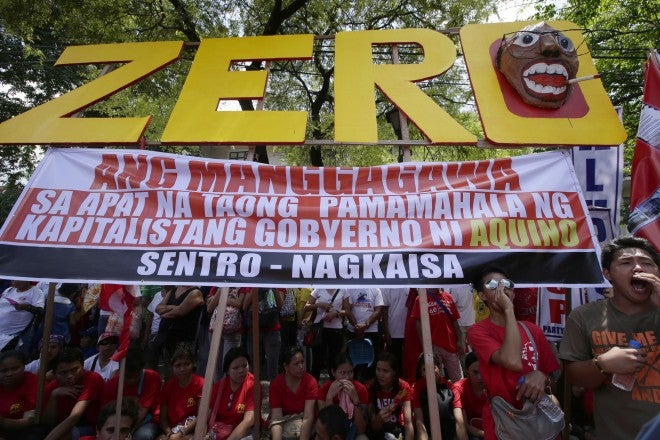 Workers shout slogans as they hold a rally near the Presidential Palace to mark the Labor Day celebrations on Thursday, May 1, 2014 in Manila, Philippines. The sign reads: Workers Have Zero Benefits In The Four Years of Capitalist Government of Aquino. AP

The Philippine economy grew 7.2 percent last year despite a string of natural calamities. Still, nearly a third of Filipinos are considered poor.

“There is growth in this country but none of the working class has actually benefited from this growth,” said Joshua Mata, one of the rally leaders.

Thousands of Malaysians held a peaceful protest in downtown Kuala Lumpur against a looming goods and services tax that they fear will increase the cost of living.

The government has said a 6 percent tax will be implemented from April next year to boost revenue and curb rising debt. There are however, mounting public concerns that prices of goods will soar and further burden the poor after the government last year cut subsidies on fuel and electricity.

Opposition leader Anwar Ibrahim, who heads a three-member alliance, said that the rally was a clear message that the people are against the new tax, “which is only going to make the cronies richer.”

Iranian President Hassan Rouhani told thousands of laborers gathered to celebrate International Workers’ Day in the capital, Tehran, that he supports the establishment of unions “free of any interference by the state.”

Rouhani’s predecessor, Mahmoud Ahmadinejad, had dissolved many unions, leaving only a few perfunctory and powerless organizations.

Dozens of people, mostly members of the Iraqi Communist Party, held a rally near the party headquarters in downtown Baghdad, raising Iraqi flags and those of the former Soviet Union.