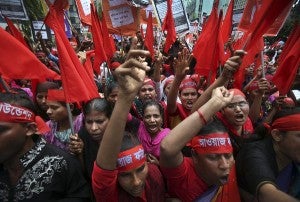 Women protesters shout slogans calling for better working conditions for garment workers during a May Day rally on Wednesday May 1, 2013 in Dhaka, Bangladesh. AP PHOTO/WONG MAYE-E

MADRID , Spain—Greek workers angry at austerity brought Athens to a standstill on Wednesday as May Day rallies around the world saw tens of thousands in Bangladesh protest poor labor conditions and violence flare in Turkey.

In Dhaka, protesters held red banners and flags chanting “Hang the killers, Hang the Factory Owners” after the devastating collapse of a garment factory, as rescuers warned the final toll could be more than 500.

At a mass in the Vatican, Pope Francis condemned as “slave labor” the work conditions of the victims of the collapse, who were making clothes destined for high street retailers in the West.

Police put the number of protesters at the main rally at more than 20,000, and there were smaller-scale protests elsewhere in the Bangladeshi capital and in other cities.

Clashes erupted in three neighborhoods leading to Taksim Square—a traditional hub for leftist May Day protests—where the authorities had blocked off the streets.

“Death to fascism. Long live May 1,” shouted the protesters who were rallying to calls of defiance from leftist parties and unions.

The Turkish government had banned May Day gatherings on the square blaming renovations.

Amid the scuffles, the Istanbul office of Prime Minister Recep Tayyip Erdogan was barricaded and defended by dozens of policemen backed by anti-riot armored vehicles.

By midday tension had abated and the protesters slowly dispersed as protests in other parts of the massive Turkish city went without incident.

In neighboring Greece, a strike stopped ferry services and disrupted public transport in Athens as workers went on the march against austerity in a country where the jobless rate reached 27.2 percent in January.

Police said 13,000 protesters had assembled in Athens and Thessaloniki.

Unusually, hard-pressed businesses stayed open to allow for shopping in the run-up to Orthodox Easter on Sunday.

Greece is caught in its sixth year of recession and has become an emblem of the painful costs of austerity policies imposed by Brussels on bailed out eurozone members.

In Spain, where the government has so far managed to avoid a full-blown international rescue, unions called for 82 protests across the country.

Spanish unemployment is at a record 27.16 percent and union UGT called on workers “to make perfectly evident the total failure of the austerity policies … which in our country is confirmed in the facts.”

Unions in France, the second-biggest economy in the eurozone, marched divided with union leaders in disagreement over government efforts to make the French work code more flexible.

French unemployment has hit a record 3.2 million people and the party of extreme rightist Marine Le Pen, which also traditionally marches on May 1, called out for a light of hope in a France “locked in the darkness of Europe.”

As recession continues to sap the eurozone and wider EU, the Eurostat data agency Tuesday reported unemployment across the eurozone climbed for the 23rd consecutive month—hitting a record 12.1 percent in March.

At the Vatican, Pope Francis urged political leaders to fight unemployment in a sweeping critique of “selfish profit.”

“Not paying fairly, not giving a job because you are only looking at balance sheets, only looking at how to make a profit. That goes against God!” he said in his strongly worded address.

Read Next
‘Epal’ bets face troops in Pangasinan
EDITORS' PICK
Over 3 Million worth of prizes to be won at Smart Padala’s SENDali Manalo Promo!
Gear up and get ready to play with Yamaha Mio Gear
Acer starts the year off strong with the Aspire Vero National Geographic Edition
If elected VP, Sara Duterte will push for mandatory military service for all Filipinos
Senate bill seeks to penalize employers requiring employees to work during rest hours
Marcos-era elections: Not what his son signed up for
MOST READ
‘Sampal sa gobyerno:’ Drilon wants unvaxxed PAO chief barred from working
Vice mayor slams Vico Sotto for turning Pasig into a ‘puro palabas’ city
Bongbong-Sara tandem names 7 candidates in initial senatorial slate
Jose Manalo’s son Benj pays tribute to late mother: ‘You’re a testimony of God’s love’
Don't miss out on the latest news and information.