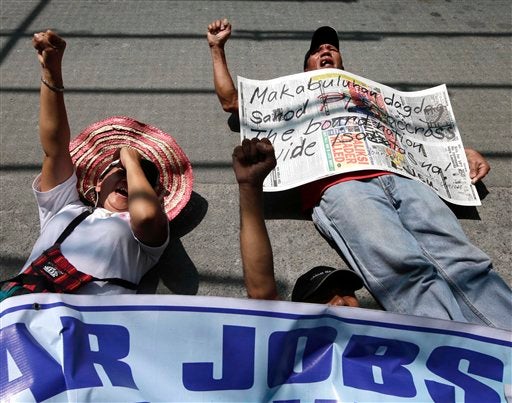 Protesters, mostly workers, picket the Labor Department in Manila, Philippines to protest the Labor Day statement by Philippine President Aquino of granting non-wage benefits to workers on April 30, 2013. This year workers will get neither a wage increase nor nonwage benefits according to Labor Secretary Rosalinda Baldoz. AP File Photo/Bullit Marquez

MANILA, Philippines—Yes, there will be job fairs galore.

But no, workers will get neither a wage increase nor nonwage benefits on Thursday, Labor Day, but there are many job opportunities in the country and abroad, according to Labor Secretary Rosalinda Baldoz.

“We’re not expecting any minimum wage increase announcement,” said Baldoz in a press briefing on Wednesday. She explained that minimum wage adjustments were decided upon by the Regional Tripartite Wages and Productivity Boards.

She noted that the law prohibited the wage board from issuing successive wage orders within a year unless there was a “supervening condition,” or abrupt and sustained increases in the prices of oil, food and other essential commodities.

“As of now, we do not see any supervening conditions that would warrant a wage adjustment,” Baldoz said.

Even nonwage benefits are not expected to be given to workers during Thursday’s celebration.

Baldoz said there were no nonwage benefits that were considered during President Aquino’s dialogue with labor leaders on Tuesday.

“Noncash benefits can come either from the Government Service Insurance System, Social Security System, Philippine Health Insurance or Pag-Ibig. They could avail themselves of that,” she said.

The Department of Labor and Employment (DOLE) is holding simultaneous jobs fairs on Thursday across the country.

There are currently 3 million unemployed Filipinos, and 7 million underemployed, according to Baldoz.

She said improving hiring rates was possible because the DOLE and its regional offices had announced early and extensively their job fair schedules using all available media.

Baldoz said the DOLE had remained consistent with its annual target of 15-percent hired on-the-spot out of the total number of qualified applicants.

Over 100,000 overseas and local jobs are available in the simultaneous job fairs that the DOLE will hold nationwide as part of the Labor Day celebration on Thursday.

“Through the job fairs, we hope to give workers the service they deserve by fast-tracking the matching of job seekers and employers, particularly in identified areas where skills are highly in demand,” Baldoz said.

A labor coalition group, Nagkaisa, chided Aquino for continuing to dishonor workers on Labor Day by failing to respond to important issues raised by labor representatives during their dialogue on Tuesday.

“President Aquino continues to ignore for four years the issues that we believe would help impact the plight of the working people. Workers are feeling deprived of the benefits due them despite their great contribution to improving the economy,” Nagkaisa said in a statement.

“Since assuming the presidency in 2010, Mr. Aquino is always being remembered by workers in every Labor Day memorial as a leader who has abandoned and failed them at the critical moment when they needed his leadership in view of growing joblessness, rising cost of living, rampant and unfettered precarious work arrangement, high cost of electricity rate and by conceding social protection services to greedy capitalists,” the group added.

Nagkaisa said it would mobilize 30,000 members for a march from Welcome Rotonda to Chino Roces Bridge (formerly Mendiola) in Thursday’s Labor Day commemoration.

Other groups gearing up for major protests Thursday include the Enhanced Defense Cooperation Agreement (Edca) in their protest agenda, even as they vowed to elevate constitutional issues arising from the defense agreement between the Philippines and the United States to the Supreme Court that was signed on Monday.

“Definitely, (we will also include Edca) because that’s an issue of the people, not just of government,” said Ferdinand Gaite, national president of Confederation for Unity Recognition and Advancement of Government Employees (Courage).

Courage is a member of the Makabayan bloc, a coalition of progressive party-list groups in the House of Representatives that also participates in antigovernment rallies.

Apart from condemning Edca, Gaite said the groups would push for a P6,000 increase in the minimum pay of government employees, and a P125 across-the-board wage increase for the private sector.

“We are also against the privatization of government agencies,” he said.

He said there were five converging points—Recto in Manila and Monumento in Caloocan, for example—for those participating in the protests.

“And we will march toward Liwasang Bonifacio, where a program will be held to highlight [those issues],” he said.

He said the groups would then march to Mendiola, where they would stay until 5 p.m.

The group said workers would call for the immediate junking of the Edca and the Charter change scheme that goes with the agreement, as well as the immediate implementation of a P125 across-the-board wage increase for workers.

A mural of Aquino will be used as backdrop for the program at Liwasang Bonifacio and Chino Roces Bridge, while an effigy named “Noynoy Puppetnoid” will be paraded and burned during the demonstration, KMU said.

KMU said protests would also be held in other parts of the country such as Cordillera, Central Luzon, Southern Tagalog, Bicol, Eastern Visayas, Cebu, Panay, southern Mindanao and Caraga.—With a report from Louie Rivera, trainee