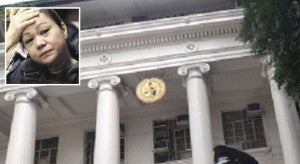 The P407-million allegedly phantom computerization project of the Department of Transportation and Communications involving Janet Lim-Napoles (in photo) will be investigated and charges will be brought against everybody involved, according to the Department of Justice. INQUIRER FILE PHOTOS

MANILA, Philippines—Justice Secretary Leila de Lima said Wednesday that she would have the P407-million allegedly phantom computerization project of the Department of Transportation and Communications (DOTC) involving Janet Lim-Napoles investigated and bring charges against everybody involved.

De Lima said Benhur Luy, the principal witness in the P10-billion pork barrel scam allegedly masterminded by Napoles, had spoken to her about the businesswoman’s dealings with the DOTC 10 years ago, but she said it was unclear whether Luy was referring to the bogus computerization program.

She said Napoles did not discuss the computer scam at the DOTC with her during their meeting last week.

“I have no knowledge about the DOTC issue. It was not included on the list [from Napoles], which covered projects funded by PDAF (Priority Development Assistance Fund),” De Lima said.

But the premise or assumption of the (Department of Justice) is that these are PDAF funds unless (Napoles) clarifies that it’s not PDAF,” she said.

She said the DOJ would look into the details of the allegedly irregular DOTC supply contracts and file charges against all those involved.

De Lima again declined to disclose the list prepared by Napoles containing the names of lawmakers and other people involved in the pork barrel scam.

“We cannot disclose it, [as] we’re still getting the rest of the statement from Napoles,” De Lima said.

“Nobody was added to the list. Any changes [on the list] will not come from us, but from Napoles herself,” she said.

A number of senators and congressmen have demanded the disclosure of the list, which Napoles gave to De Lima during their meeting in Napoles’ room at Ospital ng Makati where the businesswoman underwent surgery last week.

De Lima said the DOJ was also looking into the possibility of allowing Napoles to submit an affidavit prepared by her own lawyers detailing how the nongovernment organizations (NGOs) that she controlled siphoned off billions of pesos from the PDAF, pork barrel that channels funds to congressional districts.

Quoting Napoles’ doctors, she said the businesswoman had difficulty speaking after undergoing a surgical procedure that removed her uterus and two ovaries.

“We’re finding ways … to … facilitate the completion of her statement [despite] her physical condition. We … want to finish this as soon as possible,” De Lima said.

In the House of Representatives, lawmakers on Wednesday took the Commission on Audit (COA) to task for sitting on the report about the fictitious computerization program in the DOTC involving Napoles.

“No doubt the COA is at fault for this controversy. It breached its primary mandate to be the financial gatekeeper of the state, flagging fraud where it sees them. More than 10 years had elapsed and the COA has yet to release its report whether or not to allow, disallow, reject in toto or otherwise pass upon the DOTC transaction with Napoles,” Deputy Speaker Giorgidi Aggabao said.

“Upon a sensible view of audit rules, it must be held to include within its fair intent that examination of accounts and the release of the resulting report must be made within a reasonable time. Ten years is unreasonable,” Aggabao, who is Isabela’s representative in the House, said.

Cavite Rep. Elpidio Barzaga said the COA should explain its failure to pursue the fraudulent purchase of the computers.

“The scam could not have prospered without the assistance of COA auditors. Public funds are all subject to COA audit. Everyone is aware that the COA is the constitutional watchdog regarding the expenditure of public funds. COA Chairperson (Grace Pulido) Tan has been very vocal about the pork barrel scam yet no COA auditor has been mentioned in the pork barrel issue,” Barzaga said.

“If the COA had only acted on Napoles’ scam much earlier with the DOTC computers, there would have been no pork barrel scam,” he added.

The theft of public funds through the phantom computerization project of the DOTC 10 years ago is believed to have been a rehearsal for the staging of the P10-billion pork barrel scam.

The Inquirer obtained documents showing that Napoles’ company Jo Chris Trading cornered the P407-million contract from the DOTC for the distribution of computers and other communication equipment to local governments chosen by politicians between 2002 and 2003.

This contract was awarded to Jo Chris Trading without public bidding and pork scam whistle-blowers, who used to work for Napoles at JLN Corp. and fronted for her in a slew of fake foundations, claimed that the deliveries of computers and other communication equipment were fictitious.

Levito Baligod, a lawyer for the pork scam whistle-blowers, claimed that Napoles bought only a small sample of radio and computers and showed them to the DOTC and the lawmakers as proof of purchase and delivery.

Baligod also said that just like in the pork barrel scam, the signatures of the recipients were forged.

The purchase orders for the project was signed by then DOTC assistant secretaries Rene Maglanque (now mayor of Candaba town, Pampanga province) and Domingo A. Reyes Jr., who were identified by the whistle-blowers as  Napoles’ main connections in the agency, then headed by Secretary Leandro Mendoza.

Padilla and Sen. Cynthia Villar have tossed the blame at the DOTC, which they say had the responsibility of ensuring that the computers were bought and delivered.

Padilla said he would support moves for an investigation into the DOTC computerization program.

“I think Napoles would not have been able to perpetrate such a thing, mastermind or not, without the connivance of government bureaucrats including those in the COA,” Padilla said.

Napoles began template for racket at DOTC in ’05