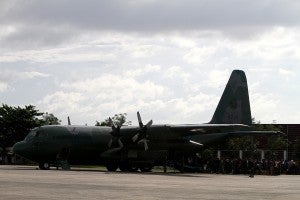 “We intend to buy also full-motion flight simulator to improve the training of our pilots,” he said in a speech aired over state-run dzRB radio.

These are on top of the new FA50 from South Korea that will be delivered to the Air Force next year, Mr. Aquino said.

“In 2005, we retired our last F5 freedom fighter. It’s our wish to enhance the capability of our pilots to fly this type of aircraft for military operations,’’ he said.

Last month, the military signed contracts for the acquisition of 12 lead-in fighter trainer jets worth P18.9-billion from South Korea and eight combat utility helicopters worth P4.8-billion from Canada.

Under the watch of Lt. Gen. Lauro Catalino dela Cruz, who retired as Air Force chief on Friday, the PAF acquired a number of aircraft. It now boasts of three C-130 transports, eight combat utility helicopters, and 18 basic trainer aircraft, the President said.

Dela Cruz turned over his post to Major General Jeffrey Delgado, AFP deputy chief of staff for plans and programs. Delgado is a former senior military aide to the President.

The President did not make any reference to a defense agreement allowing increased US military presence that is widely believed to be signed during President Obama’s visit on Monday.

Reports say that the signing of the Agreement on Enhanced Defense Cooperation will be the cornerstone of Obama’s visit to the country.

Under the deal, the Philippines has agreed to allow the United States access to the country’s military bases in the face of China’s increasing aggressiveness in the South China Sea.

Philippine authorities will have access to US facilities inside local military bases.

The President said the new Air Force chief, a member of the Presidential Security Group during the term of then President Corazon C. Aquino, was a multi-skilled pilot who survived two air crashes.

He said Delgado was among a few pilots who could fly a combination of fixed and rotary wing aircraft, and was a qualified pilot for combat aircraft T-28D and MG520, trainer aircraft T-41D and SF -260, and co-pilot of the passenger aircraft BN Islander.

“The report that reached us was that two planes he flew crashed due to engine failure, including one that nearly cost him his life,” he said. “Despite the dangers of flying, he did not opt out of public service.”