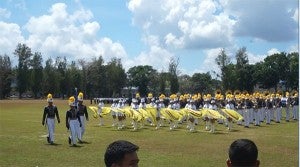 LIPA CITY, Philippines—Guests at the change of command ceremony for the Air Force leadership were treated to a military band performance and a show in the sky on Friday at Fernando Air Base here.

Lieutenant General Lauro Catalino dela Cruz retired from service five days ahead of his mandatory retirement on Friday, April 25. He was replaced by Major General Jeffrey Delgado, a seasoned combat pilot also known for his strong ties with the Aquinos.

“It’s very clear: It wasn’t a mistake to choose Lt. Gen. dela Cruz to lead the Air Force. They soared higher and the Air Force became stronger under his leadership,” Aquino said in his speech.

Aquino said that when he started as President, there was only one C-130 cargo plane in the Air Force inventory that sends out items to be used by the troops deployed in far areas and sends out help to typhoon-ravaged places.

“When typhoon “Sendong” battered Visayas and Mindanao in 2011, despite the lone C-130 at that time, you didn’t mind coming back and forth in affected areas to help out,” Aquino said of dela Cruz.

“Fast forward to 2013 when one disaster came after the other. From Zamboanga crisis, earthquake in Cebu and Bohol, and super typhoon “Yolanda” in the Visayas, the whole world witnessed your selfless service to our countrymen,” Aquino said.

The President noted how the Air Force responded in the aftermath of super typhoon Yolanda. It flew immediately to Tacloban as soon as “acceptable parameters” for flying had been reached.

Dela Cruz chose to retire at Fernando Air Base because it was where he started as a pilot.

“Because this is where I started out as a soldier and a public servant, I requested to retire here. I am grateful that the President granted my request,” dela Cruz said in his speech.

Planes flew thrice in the sky during the ceremony. At the end of the event, a flyby with letters “TY” formed in the sky using SF-260 and T41-D Marchetti planes. It stood for “thank you” to dela Cruz.