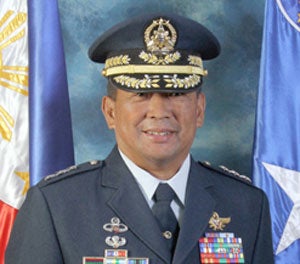 Lieutenant General Lauro Catalino dela Cruz, Commanding General of the Philippine Air Force, will retire five days ahead of his scheduled retirement at Fernando Air Base in Lipa, Batangas.

“This was directed by Malacañang because of the availability of the President,” Air Force spokesperson Colonel Miguel Ernesto Okol said on Tuesday.

It will be held at Fernando Air Base as requested by Dela Cruz because it was where he started. He will reach the mandatory retirement age of 56 on April 30.

“He requested to retire in the place he started where most if not all pilots started their careers,” Okol said of Fernando Air Base, where the flying school of the Air Force is located. Dela Cruz is a helicopter and combat helicopter pilot.

The successor of dela Cruz has not yet been revealed. It is President Benigno Aquino III who will choose the next Air Force chief.

One of the leading contenders for the top Air Force post is Major General Jeffrey Delgado (Philippine Military Academy Class of 1982), deputy chief of staff for plans. During the presidency of Aquino’s mother, he was assigned with the Presidential Security Group.