Drilon calls for sobriety as mudslinging, witch hunts loom due to pork scam 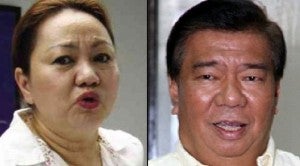 MANILA, Philippines — Senate President Franklin Drilon on Wednesday called for an “atmosphere of sobriety” as he expressed fear that the “pork barrel” scam might be used for “mudslinging,” “witch hunts” and “smear campaigns.”

While he expressed complete support for the full and immediate prosecution of all individuals involved in the scam, regardless of political affiliation, Drilon cautioned against turning the issue into “unlimited opportunities for mudslinging, witch hunts and smear campaigns.”

“I fully support the full prosecution of all individuals involved in the pork barrel scam. The quest for justice must spare no one no matter their affiliation, and even the administration lawmakers and allies of the President must be covered by the investigation and its eventual prosecution,” he said in a statement.

He said the pursuit of delivering justice “should be blind to political colors.”

But Drilon said the process  of finding out the truth  should not be turned into unlimited opportunities for mudslinging, witch hunts and smear campaigns, “which serve only to further the personal and political causes of some individuals.”

The Senate leader then  called for an “atmosphere of sobriety” on the process of ferreting out the whole truth and enforcing the law on the controversy.

“In the face of controversy, what is important is we remain rational and circumspect while we search for the truth, and until we have put the perpetrators in jail. A sober approach on this controversy is of paramount importance, in order for this process to be successful,” he said.

“I understand that this issue provides a lot of opportunities for political attacks. But we should not muddle the issue by embarking on witch hunts and black propaganda and ruin the sincere efforts to find the truth and render justice.”

“When anyone becomes a target of propaganda attacks, it is their reputation – their very integrity – that is wrongly put at stake,”  Drilon said.

While he also wants all involved in the scam to face the full brunt of the law,  the charges against them, he said,  must be  supported by  “compelling and undeniable evidence.”

Drilon said those who will be charged  should also  be given adequate opportunities to defend themselves,  while those proven innocent should be freed of the charges.

“It is only through our courts and the country’s justice system that we can achieve the genuine truth and justice rightfully demanded by our people. I invite everyone to help us in this just cause,”  he further said.

If Napoles names Aquino allies, they’ll be brought to bar of justice – Palace

Militants: Napoles as state witness is ‘clear travesty of justice’