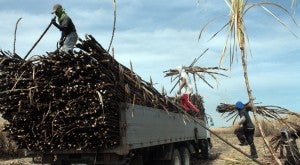 CITY OF SAN FERNANDO, Philippines—A company owned by the family of President Benigno Aquino III has asked the Tarlac City government to reaffirm the nonagricultural classification of a 358-hectare land in Hacienda Luisita in a bid to save that part of the estate from compulsory acquisition by the national government.

The Tarlac Development Corp. (Tadeco), through its official, Josephine Cojuangco-Guingona, made the appeal in a briefing last week for local officials led by Tarlac City Mayor Gelacio Manalang and the city council.

Guingona told officials that the Department of Agrarian Reform (DAR) placed the property under agrarian reform coverage in December 2013 “despite its classification as residential as early as 1985 per Tadeco tax declaration and realty taxes paid as such and accepted by Tarlac City.”

In a briefing paper sent to the Inquirer, Tadeco said it had transferred all its property devoted to agriculture, comprising of 4,915 ha, to Hacienda Luisita Inc. (HLI).

HLI managed the stock distribution program (SDP), the first mode of agrarian reform in the sugar estate in 1989.

“All other property devoted to residential purposes remained in the name of Tadeco. The Supreme Court recognized that the remaining Tadeco land is nonagricultural,” the paper said.

The November 2011 resolution of the high court said it ruled to distribute to more than 6,000 farm workers the 4,915 ha because these were the only ones covered by the SDP, not the estate’s entire 6,443 ha.

Tadeco land in Barangay Cutcut II is near the Lourdes home lots and Don Pepe Homes, where the families of farm workers and sugar mill managers and supervisors live. Tadeco said these had been “zoned and reserved for low-cost housing for industrial zone locators.”

Guingona also presented a resolution of all 11 village chiefs supporting Tadeco’s protest against agrarian reform coverage of the 358 ha.

“Tadeco will appreciate any additional resolutions from the Tarlac City government, addressed to DAR again, recognizing its zonal plans and land use that will allow [and] provide a balanced economic development of the city apart from just agriculture,” Tadeco spokesperson Ramon de Vera told city officials.