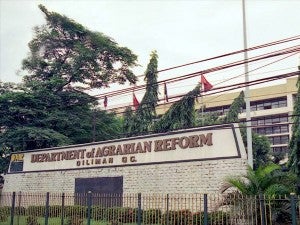 MANILA, Philippines—The Department of Agrarian Reform denied allegations that the Cojuangco side of President Benigno Aquino’s family was overpaid for Hacienda Luisita land that was parceled out to farm workers in October last year.

The DAR said there was no basis to the accusation of ACT Teachers party list Representative Antonio Tinio that there was overpayment by some P167 million—interest on part of the compensation that should have been paid much earlier—for the land.

In a statement, Agrarian Reform Undersecretary for Legal Affairs Anthony Parungao said the agency’s legal basis for the payment of interest came from the Comprehensive Agrarian Reform Law itself, specifically Section 18 of Republic Act 6657.

In computing the compensation for the sugar estate, the Land Bank of the Philippines based its valuation on prices as of 1989, the year which the Supreme Court ruled should be the point of reckoning, he said. The land reform law took effect in June 1988.

“Therefore that should be the reckoning point of the determination of the land’s valuation and the amount of just compensation,” Parungao added.

Since the land was deemed to have been taken by the government that year, the agrarian reform bonds component of the compensation earned interest during the 10-year maturation until 1999, he said.

“The P167 million is the accrued interest of the bonds for the said period. No interest was paid on the AR Bonds after 1999,” Parungao said.

“If the interest on the AR Bonds is factored in, the price the government is paying for Hacienda Luisita land is P104,759.52,” he said.

Farmer-beneficiaries of the estate will be paying P46,150.75 spread over 30 years beginning with a monthly amortization of P57.59 for the first three years, Parungao said.

He added that the department would  welcome any investigation in order to put to rest doubts on the compensation to the Cojuanco family.

In 1988, when the CARL  took effect, the Cojuangco owners of Hacienda Luisita gave the farmers an option to own shares of stock instead of land in what some quarters alleged was a way to circumvent the spirit of land reform.

After a prolonged court battle, in 2012, the Supreme Court upheld with finality the decision of the Presidential Agrarian Reform Council in 2005 to scrap the stock distribution option for Hacienda Luisita.

It ordered the parceling out of 4,915 hectares of the estate to 6,296 farm workers. The DAR later identified and released a final master list of 6,212 approved beneficiaries, and parceled out the land late last year.