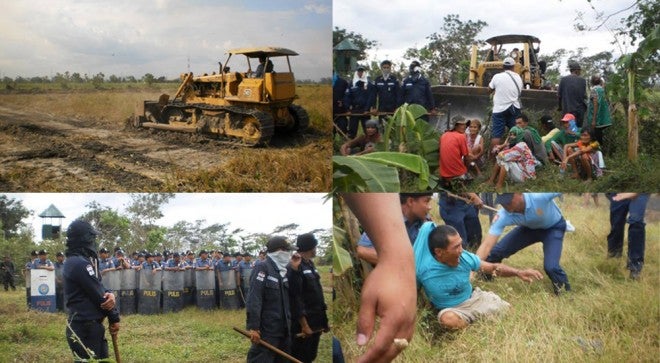 MANILA, Philippines – Tension between farmers and authorities flared anew at the controversial Hacienda Luisita in Tarlac, following the arrest of eight farmers and the alleged clearing of farmlands, reports said on Sunday.

Unyon ng mga Manggagawa sa Agrikultura (UMA), in a statement, said eight residents of Barangay (village) Balete and Asturias in Hacienda Luisita were allegedly seized by local police during a confrontation with the guards of the Tarlac Development Corporation (TADECO) on Saturday afternoon.

UMA alleged that TADECO ordered the clearing of agricultural land already distributed to the farm workers.

“During the confrontation, security guards of TADECO told the farm workers that they will continue bulldozing the land…which TADECO is now claiming to be theirs,” the statement said.

The farmers insisted that the land was covered by the land reform program of the Department of Agrarian Reform.

However, “The police officers and guards brushed off the arguments of the farm workers and proceeded with bulldozing the rice fields of the family of Melchor Ramos,” UMA said.

Those who tried to stop the operations were arrested and were identified as Rod Acosta, Eufemia Acosta, Ronald Sakay, Jose Baldiviano, Elsa Baldiviano, Manuel Mandigma, Mamerto Mandigma, and Vicente Sambo.

UMA claimed TADECO had been clearing rice fields in Balete village starting December 12, “the same day DAR issued a Notice of Coverage declaring that the particular 358-hectare disputed land is in fact part of the Hacienda Luisita agricultural estate that must be subjected to land reform.”

They said the eight farmers were brought to the provincial police headquarters in Tarlac City.

INQUIRER.net was able to contact the Tarlac City Police Station but has yet to receive their verified report on the arrest. One police officer said the confrontation at Balete village is still ongoing.
Related stories