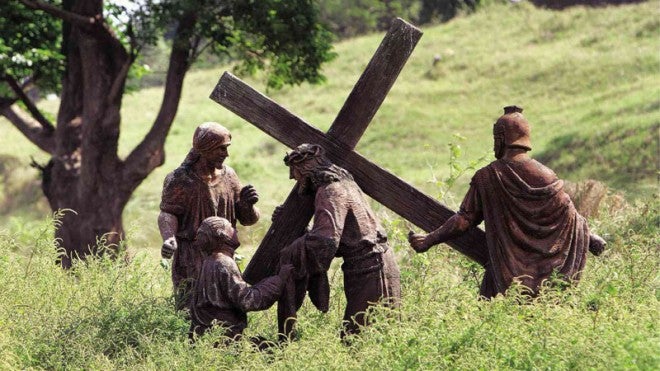 JESUS MEETS HIS MOTHER. A rendition of the 4th Station of the Cross, where Mary meets Jesus, is found in Alfonso, Cavite province, on land donated by San Miguel Corp. to the group of “healing priest” Fr. Suarez, who is returning SMC’s donation.  LYN RILLON

The “healing priest” Fr. Fernando Suarez will celebrate his last Mass at MonteMaria in Alfonso town, Cavite province, on Easter Sunday after his Mary Mother of the Poor Foundation (MMPF) decided to return the 33-hectare property donated to it by San Miguel Corp. (SMC).

Suarez is known in the Philippines and abroad for his gift of healing. Many people who have experienced or witnessed the miraculous healing have confirmed the priest’s gift.

But like most gifted people, Suarez always says he is only a channel and that it is God who heals those who have faith.

Not all bishops welcome Suarez in their ecclesiastical territories and some have been speaking unfavorably of him in a recent series of reports on the Monte Maria property published in the Inquirer.

But Bishop Antonio Palang, SVD, DD Vicar Apostolic of the Vicariate of San Jose, Occidental Mindoro province, has issued a letter to dispel doubts about his integrity.

In that letter, Bishop Palang says: “To whom it may concern: Between March 5 and 9, 2014, a series of articles was printed in the Philippine Daily Inquirer newspaper. The article alleged irregularities in the charitable foundation called Mary Mother of the Poor that [Fr. Fernando Suarez] founded. In addition, his healing ministry and lifestyle were also attacked.

“I certify that the accusations in these articles are unfounded and not true. Fr. Fernando Suarez [of the] Missionaries of Mary Mother of the Poor is a priest of good standing in the Apostolic Vicariate of San Jose, Occidental Mindoro.”

Last month, the Inquirer published a five-part series that highlighted the withdrawal by food and beer giant San Miguel Corp. (SMC) of its donation of a 33-hectare property in Alfonso town, Cavite province, that would have been the site of an MMPF project, the MonteMaria Shrine complex, which would include a statue of the Virgin Mary taller than the 30-meter Christ the Redeemer statue in Rio de Janeiro.

Among the reasons cited was failure of the MMPF to erect the structures within five years of the donation.

Suarez was in the Holy Land when the series was published. In his absence, MMPF board member Deedee Sytangco (former spokesperson of President Cory Aquino) offered some explanation.

Only after Suarez had returned from the pilgrimage that he was able to air his side, which appeared in the fifth part of the series.

“It was too late, the damage had been done,” a friend of Suarez said.

Columnist Ramon Tulfo also wrote negatively about Suarez. The priest later said Tulfo had personally apologized, admitted he was misinformed and sought to be prayed over.

Monsod asked Suarez point-blank about the allegations. Suarez either explained them away or flatly denied them.

When asked if he thought SMC might have had something to do with the bad press he was getting, Suarez answered yes.

Suarez himself had admitted that MMPF could not meet SMC’s expectation, which was to build the Marian complex as originally planned within five years.

The foundation has decided to return the property.

Interviewed backstage by a TV5 crew after last Palm Sunday’s Mass, Suarez confirmed that the SMC property will indeed be returned.

The MMPF, he said, had offered SMC one of three things: Make a loan so that the MonteMaria project could proceed, build a columbarium, or just build the statue of the Virgin Mary.

The original MonteMaria project is no more. But a Marian site for prayer and healing remains on the horizon.

Suarez has denied accusations of having a lavish lifestyle, but admitted that playing tennis kept him sane, his way of warding off stress, and that he was merely invited to tennis clubs frequented by the rich.

“I ask for nothing, I decline nothing,” he would always say when questioned about donations to him and to the foundation.

Suarez ministers to both the poor and the rich, to people from all walks of life who come to his healing Masses. 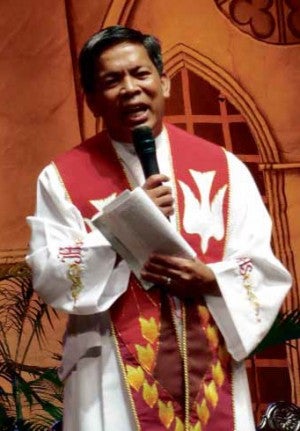 ‘MOVING ON, REJOICING’ “The healing priest,” Fr. Fernando Suarez, delivers the homily during the Palm Sunday Mass at Meralco Theater.He spoke about moving on with service and sacrifice with rejoicing. CERES P. DOYO

He had some strong words for those who had written negatively about him without getting his side.

Merely saying later that they were misinformed, which was not an excuse.

He considered suing for libel those who besmirched his reputation and his ministry but Christian forgiveness prevailed over him, he said.

Despite the negative publicity, Suarez continues to pack them in. The Meralco Theater was packed when he concelebrated Mass and delivered the homily on Palm Sunday.

The homily theme assigned to him, “Moving On,” was in sync with his personal decision to move ahead and not look back on hurts and accusations hurled at him.

Pointing to the cross as a starting point, Suarez urged the people to move on from there toward sacrifice and service.

Suarez gave meaning to every letter in the word “cross.”  C, he said, stood for Jesus saying, “Come to me.”  R was not only for repentance but, more important, for rejoicing. O stood for openness to God’s message. The two S’s in the word “cross” stood for sacrifice and service, which, Suarez said, is what mission is all about.

“Mission,” he stressed, “not asking for commission.”

He could have been referring to the P10-billion pork barrel scam that involved lawmakers and government officials who allegedly channeled public funds to dubious organizations and into their own bank accounts.

Those who seek commissions, Suarez said, end up in distress.

Admitting to being a fan of Pope Francis, Suarez, while delivering his homily, was holding a copy of the Pontiff’s apostolic exhortation “Evangelii Gaudium (The Joy of the Gospel)” and often quoted from it.

He sometimes picked up his cell phone and read from it quotes from the Pope.

Christians must live joyful lives, he said, echoing the Pope’s exhortation. “Do not be too hard on yourself,” he said, paraphrasing Sirach 14:11: “My child, treat yourself well. Do not deprive yourself of enjoyment.”

As long as it is not sinful, Suarez added.

But he also said: “Do not be afraid of the cross. Jesus is offering us joy. Then we can move on.”

Shifting to a light mood, Suarez said someone commented about his good looks.

“I said it’s because I am being persecuted,” he said, laughing.

Suarez’s down-home homilies and Batangueño humor resonate well with Filipinos from all walks of life.

Suarez also spoke about his new mission assignment among the Mangyan in Occidental Mindoro.

Bishop Palang recently assigned him to be the apostolic vicar to the Mangyan in the diocese in addition to MMPF apostolate among the poor and the running of a formation house for seminarians on the remote island of Ilin off Occidental Mindoro.

He separated from the Canada-based Companions of the Cross and founded the Missionaries of Mary Mother of the Poor (MMMP), which has a “pious association” status for now.

Bishop Palang took Suarez and his group into his diocese several years ago.

Suarez described his arduous mountain trek to a Mangyan community in Lagnas town in Mindoro and the difficult life of the Mangyan.

“When I asked them what we could do together, their answer was, ‘Father, let us build a church,’” he said.

Poor as the Mangyan were, they did not ask for material assistance, he added.

Suarez was one of six priests who concelebrated the midday Mass after the Palm Sunday Family Recollection organized by the Angel Mission, a group of lay people animated by Fr. Jerry Orbos, SVD.

The yearly recollection for lay people is now in its 18th year, said Sytangco, one of the organizers.

The other Mass celebrants aside from Orbos were SVD priests Ed Guarin and Paul Dogba; Nelson Cabanero, SMM, and Eliseo Santos, SDB.

The blessing of the palms was part of the service.

Before the Mass, the audience listened to personal testimonies from lay people who had undergone physical and moral sufferings followed by the healing of body and spirit.

Santos, a Salesian, delighted the audience with his talk punctuated with witty remarks and his creative use of props.

Let it go, let it be

Orbos, who writes a Sunday column in the Inquirer, kept pointing to the road to God’s heart. He sang the refrain of the hit song “Let It Go” that segued into the Beatles’ “Let It Be.”

After the Mass, Suarez did a general healing prayer for those with physical, mental and spiritual ailments. He did not go down to the audience to touch the sick. Instead, a priest holding a monstrance with the consecrated host went around for eucharistic healing.
RELATED STORIES

Father Fernando Suarez: I forgive and pray for my detractors