Father Fernando Suarez: I forgive and pray for my detractors 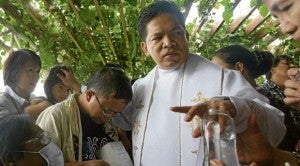 In this INQUIRER file photo taken sometime in August 2011, Father Fernando Suarez dips his fingers inside a bottle to bless its water during a healing Mass attended by some 50,000 people

“I know myself and God knows who I am.”

This is what “healing priest” Fr. Fernando Suarez has to say about criticism of how his Mary Mother of the Poor (MMP) Foundation has been handling its finances and to allegations that he is living a lavish lifestyle.

“I know that all the criticisms and lies that have been published will help me become a better person, a better priest,” Suarez said on Saturday through his spokesperson, Deedee Siytangco, who is a member of MMP’s board of directors and has been his devotee since 2006.

Siytangco said she had known Suarez for more than nine years.

“I’m among those people touched by his ministry. I had a brain tumor before but with the help of a good doctor and Father Suarez’s prayer, I was healed,” she said.

Suarez returned to Manila Friday night after a nine-day pilgrimage to the Holy Land.

Siytangco told the Inquirer by telephone that Suarez was unavailable for an interview, as the priest was on a “perpetual adoration” and had asked her to speak for him.

No need to explain

“Father Suarez feels he doesn’t need to explain anything. He said he had forgiven all of his detractors and he would pray for them. For all these trials, he said he was privileged to have suffered with Jesus at this time when we are commemorating Lent,” she said.

Siytangco said she looked forward to the joint statement that MMP and San Miguel Corp. (SMC) reportedly would release to announce the termination of a deal for the donation of a 33-hectare SMC property in Alfonso town, Cavite province, to Suarez’s foundation.

“But for you to say it’s a ‘collapsed deal’ is going ahead of us,” she said.

As for the funds for building a Marian shrine on the SMC property, Siytangco said the money was intact and “funds are still coming as we speak.”

“We can start the project already. We don’t have all the funds but once we start it, more funds will come in for sure,” she said.

On insinuations that Suarez mishandled the foundation’s finances, Siytangco said the priest was “above all these.”

“He’s not the foundation. We have a treasurer, we have audited statements, funds are spent well,” she said.

“It’s just so sad that some people are trying to put down a priest who only wants to heal. There seems to be a concerted effort to have him defrocked, his ministry stopped,” she said.

Siytangco also defended Suarez from allegations that he was living a lavish lifestyle.

“He doesn’t even own a watch. Most of his T-shirts are given to him by friends but he gives them to other priests. He wears Crocs sandals but they’re fake, also given to him,” she said.

She acknowledged that Suarez watched the French Open last year but claimed that neither he nor the foundation spent for it.

“He was invited by a friend, a Hindu, whom he helped convert into Catholicism,” she explained, adding that Suarez plays tennis “to keep his sanity.”

“He plays tennis and he’s very good at it. He’s a champion. It’s also his exercise. Is that wrong? He doesn’t play poker,” she said.

“You know, those that were published were half-truths but if you don’t tell the other truth, it becomes scandalous,” Siytangco said.

“We stand by him, the foundation stands behind him. We will continue his ministry, healing, livelihood, all the things that he does,” she added.

Suarez will go to Occidental Mindoro today, particularly to Ilin, a remote town in the province where a small chapel was built by his followers, Siytangco said.

Ilin is among the beneficiary communities of Suarez’s charitable foundation.

“He will spend time there. He has his ministry there, livelihood, among others, which we hope to replicate in other parts of the country,” Siytangco added.

Suarez will continue to devote his time to his ministry, Siytangco said.

“His ministry will continue whether some bishops like him or not. It’s just unfortunate that some old issues have been dug up because of the egos of some prelates,” Siytangco said.

Several bishops reportedly closed their doors on Suarez because his healing ministry had turned out to be a moneymaking venture and that he was celebrating healing Masses in their dioceses without their permission.

But Siytangco stressed that Suarez celebrates healing Masses only when invited and assured that it had permission from the bishop.

“And the collection during Mass goes to the parish, not to him,” Siytangco said.

“He doesn’t impose himself on anybody, including the two bishops who banned him from their dioceses,” she said, adding that Suarez is welcome again in Pangasinan province because Cruz has already retired.

“In Bulacan province, Bishop Oliveros still wants him banned but you know, it’s his parishioners who are disadvantaged, not Father Suarez. These are poor people, many of whom can’t afford to go to doctors. Father Suarez says, ‘If they ban me, I have no job to do, I won’t get tired,’” Siytangco said, adding that Suarez stays for hours during healing sessions and touches everybody.

“If there are 6,000 people in the crowd, he will touch and pray for each and every one of them. But he always tells people that he’s just a conduit of God. Now, if they want to take that away from him, fine. He’s welcome abroad,” Siytangco said.

Siytangco took offense at allegations that Suarez’s healing ministry is a moneymaking venture.

“That’s not true. The rosaries and bracelets that we sell are made by poor people, it’s their livelihood. I’ve talked to Archbishop Cruz about it a few years ago and told him, ‘Doesn’t the Vatican sell?’ People donate to the foundation, how can that be moneymaking?” she said.

Siytangco also clarified that MMP still planned to build a Marian shrine on the Cavite property that SMC donated to Suarez’s healing ministry in 2010.

A scale model of the Marian shrine shows a statue of the Virgin Mary towering over a cathedral, a livelihood center and a youth development center, among other features.

SMC donated the property to Suarez’s ministry on the condition that he build the shrine within five years.

But after almost four years, only a makeshift chapel, an administrative office and Stations of the Cross have been built on the property. A source familiar with SMC’s role in the project said the company, seeing no progress, had canceled the donation and was taking back the land.

Siytangco denied that MMP failed to present a viable plan for the development of the shrine.

“We intend to finish it. We already spent P100 million to develop the area, including the roads, among others. We cannot put up the structure there without these developments. It’s not true that we don’t have a development plan; we showed it to them (SMC),” she said.

Siytangco, however, said MMP had planned to “downsize” the project but SMC rejected it.

“SMC wants the original plan. But the plan that we have is from the Batangas project and we found out that Batangas’ topography is different from Cavite’s, so we told them that we have to downsize,” she explained.

Before the SMC donation, MMP was supposed to build the Marian shrine in Batangas City on a 5-ha property owned by Hermilando Mandanas, a former governor of the province and member of the House of Representatives.

A Marian center is under development on Mandanas’ property but Suarez’s ministry has nothing to do with it. Mandanas told the Inquirer on Friday that Suarez moved his Marian shrine project to Cavite in 2010 because the SMC property was larger.

Siytangco said there were no plans to build the shrine somewhere else, referring to reports that MMP was moving the project to another location.

“As we speak, it’s still in Cavite, unless SMC tells us they want it back. If that happens, we’ll give it back and thank them. Then maybe look for another place where we are welcome, if it’s God’s will,” she said.

“But you see, Father Suarez has touched so many lives there [in Cavite]. It has been put to good use, many people were healed and converted,” she said.

She, however, added that MMP had yet to sit down with SMC for a discussion of the Alfonso property.

Suarez, Siytangco said, will celebrate Mass in the covered court that serves as a makeshift chapel in his ministry center on the SMC property on March 16.

The ministry center is called Montemaria (Mary’s Mountain) and Suarez celebrates Mass there every third Sunday of the month.