Siquijor ‘healer’: For every cure, there’s a plant 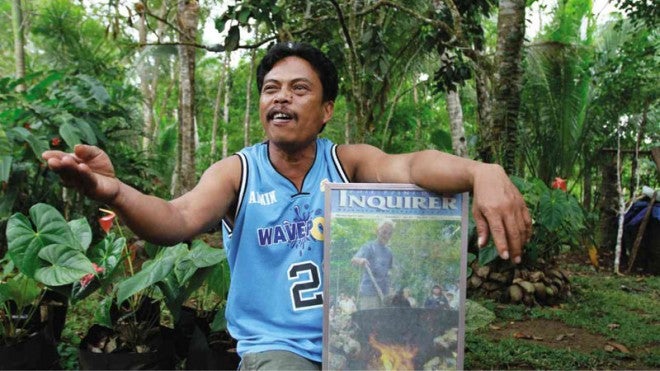 ‘HEALER’ OF SIQUIJOR Noel Torremocha, 43, holds a photo of his father-in-law, also a healer, who was featured in the Inquirer several years ago. EDWIN BACASMAS

SIQUIJOR, Philippines—There is a plant for everything.

“Here, we still believe that nature and men are one. Man is an extension of nature. Nature would always want itself to heal,” said Noel Torremocha.

Nong Noel—Nong is short for manong, or older man—says all plants are medicinal and all kinds of ailments are curable with plants.

With a bottle of gayuma or love potion made from select herbs, you may finally win the love of your life.

With a rub of lana or oil on your body, the rash on your skin or even a cyst in your breast may disappear for good.

These potions are what the local mananambal or healers like Nong Noel of Siquijor claim they mix and brew.

The island’s evasive mambabarang or sorcerers—who refuse to be interviewed—also rely on nature when brewing their sumpa (curse) that comes with sickness and pain to their victims.

The choice of practice among herbalists on the island is what distinguishes the mananambal from the mambabarang.

The Lenten season—a Christian commemoration of Christ’s passion, death and resurrection—is the most popular time in local culture to reconnect with supernatural beliefs and pagan rituals.

For herbalists, this week is said to be the season for the unleashing of their power. Thus, they are strongest this time of the year.

In this generation of selfies and iPads, old rituals on the quaint island of Siquijor are still very much alive.

What happens in Siquijor during Holy Week?

During the seven Fridays of Lent, the mananambal of the island explore five sacred places—mountains, seas, caves, churches and cemeteries—to gather needed ingredients for pagluto or brewing. This process is called pangalap.

Candles from churches and bones from graves are collected during the last Friday of Lent as final ingredients in the pagluto.

Nong Noel, 45, president of the Cantabon Healers in Siquijor town, learned his craft from his father-in-law, Nong Pedro “Endoy” Tumapon, who died in 2007 at the age of 80.

(Note: We took a photo of Nong Noel holding a framed Inquirer issue (April 9, 2007 issue) that featured Nong Endoy in the banner photo, stirring a potion in a cauldron. Noel said it was Nong Endoy’s last brew before he died that year.)

Nong Endoy passed down the craft to Nong Noel, his apprentice, when he was still alive. The old man also taught him how to identify and find herbs in the forest.

“You can’t appoint a successor outside the family. He or she must be a family member,” Nong Noel told the Inquirer.

At the back of his one-story house in the mountain barangay of Cantabon is a nursery of plants that are sources for gayuma, medicinal solutions and good luck charms.

In preparation for the pagluto on Good Friday and Black Saturday, the plants are chopped and classified according to their use.

The varied collection of herbal ingredients includes: tagiwili for good luck in business; taliguro, talirunghay and duol for potions meant to make the drinker desirable; tagihumok and taginunot for good career and job-hunting choices; bugang tapol for countering sumpa from mambabarang; and manunggal for saving poisoned victims.

A bottle of potion costs P500. But Nong Noel does not sell them in public places.

“I admit that healing has also become a business. But you must thoroughly explain to the patient how to use the potion, or else, all will go wrong,” he said.

“It’s hard to explain this in public. You would also be embarrassed to ask how a love potion works in public, right? So I only perform healing rituals and give instructions in the house, in private.”

Nong Noel also performs a ritual similar to exorcism whereby herbs are burned and the patient is covered with a blanket to drive away bad spirits. He does this on Good Fridays, too.

“It’s not like sili (pepper) that instantly makes our food spicy. The patient also has to be patient and eat the right kind of food. Rituals are useless if you still have an unhealthy lifestyle,” he added.

Believers from all over

Girlie Maing, 54, from Zamboanga City, has been going to Nong Noel’s house every Holy Week for 17 years now. Her annual visit has become her panata (promise).

“I used to have diabetes. Nong Endoy healed me completely. I come to Siquijor even after he died because Noel continued his legacy,” she said.

Many others from Masbate, Cebu, Davao and Luzon come back to Nong Noel every year for continued patronage of herbal medicines.

Mayor Wilfredo “James” Capundag Jr. of San Juan, Siquijor is a practicing mananambal. He has gathered and dried ingredients from the sea, like jellyfish, starfish, seaweed and others, in preparation for the pagluto.

He says, however, that the pagluto that will be performed in public by various groups of healers on Friday is just a demonstration of how sumpa and pangdaot (curses) are brewed by the mambabarang.

In reality, for a curse to become effective, a mambabarang must not allow anyone to see him/her while he/she is brewing the potion.

“Most mambabarang do their brewing in mountains and caves on Good Fridays. To craft a curse requires isolation,” Capundag says.

The public pagluto on Black Saturday that is done by Cantabon Healers and San Antonio Healers from 10 a.m. to 3 p.m. in Mt. Bandilaan, on the other hand, is for healing and protection against Good Friday’s curses.

“When the intention is good, there’s no need to hide. The herbalists can brew in public and it will still be effective,” Capundag says.

Public brewing for both healers and sorcerers only happens during the Holy Week. To celebrate it, the local government has turned this annual tradition into a “Healing Festival”.

After the pagluto, the healer now has a supply of potions ready to be used.

Each mananambal chants a prayer when performing healing rituals on patients.

“We turn to the saints and the Virgin Mary, and ask them to help us pray to God so we may heal the patient,” Nong Noel said.

Healers also have talismans or habak that they use to shield themselves from their patient’s sickness and from other healers’ powers. Some carry stones with them; others eat paper with Latin prayers written on it.

“But the most important talisman of all is prayer. The most effective medicine is faith. The patient has to believe that he/she will be healed in order to be healed,” Capundag says.

For the herbalists in Siquijor, it takes both religion and superstition to brew cures and curses, charms and harms. It will also take both for a patient to be healed.

Brewing only happens in public once a year. This is the time for the rest of the world to see how theirs is a society that hasn’t cut its ties with nature and still treats it as a part of the human race.

‘Kamias’ for fever, ‘siling labuyo’ for headache–first aid in the kitchen

Your backyard, neighborhood market as your ‘medicine cabinet’

Herbs with medicinal or health-giving properties